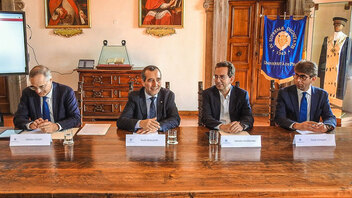 The European Broadcasting Union (EBU) and the University of Pisa have agreed to collaborate on the development of software systems such as the EuroVOX project, an open platform designed to make content accessible in all European languages.

The EuroVOX project aims to provide enabling technology for a European digital space designed to reduce languages boundaries. Such a space would allow European citizens to more freely draw on viewpoints and information from across the region’s languages and cultures.

The collaboration between the EBU and University of Pisa also spearheads a model for collaboration that invites stakeholders from all sectors, backgrounds and age groups to contribute to a common vision. “We want to create a new reference model for the innovation of new ideas and technologies in Europe”, said Antonio Arcidiacono. “We want to mobilize the best brains and create opportunities in their countries of origin, alongside their universities, with concrete objectives and in proximity to the industry. This will benefit all parties, counter the emigration of skills elsewhere, build the European skill-base in crucial areas such as artificial intelligence and data science, and support Europe’s digital sovereignty.”

The University of Pisa will contribute artificial intelligence algorithms and data science techniques to EuroVOX and other projects through an integrated programme rolled out jointly with the EBU. As part of the programme, three biennial research fellowships will be awarded to young University of Pisa scientists. Successful applicants will be working in close coordination with the EBU Technology & Innovation department and conduct periodic internships at EBU Headquarters in Geneva.

"The importance of this project is immense”, said University of Pisa Rector Paolo Mancarella. “Linguistic diversity is a heritage to be protected, but also a barrier that limits access to news and information. Being part of the working group that will lead to its overcoming is a great honor for our University, and an acknowledgment of our excellence, internationally, in our research on algorithms and artificial intelligence applied to texts and language processing."

“Today’s popular digital platforms are often commercial and based outside of Europe, and their algorithmic choices for recommendations and personalization can be quite opaque and market-driven”, said University of Pisa Professor Paolo Ferragina. “New European tools can address this and help to open the region’s vast cultural richness and heritage to users all over Europe and beyond.”

Stefano Ciccotti, Chief Technical Officer at Italian public broadcaster Rai, endorsed the new collaboration and emphasized the role of public service media as “centres for research and development that bring vital stimuli to a country's economy. Universities are crucial in providing the necessary knowledge, skills and substance. The EBU can lift such a cross-sectoral collaboration to the European level, and leverage and share innovations, academic know-how and resources to the benefit of all.”