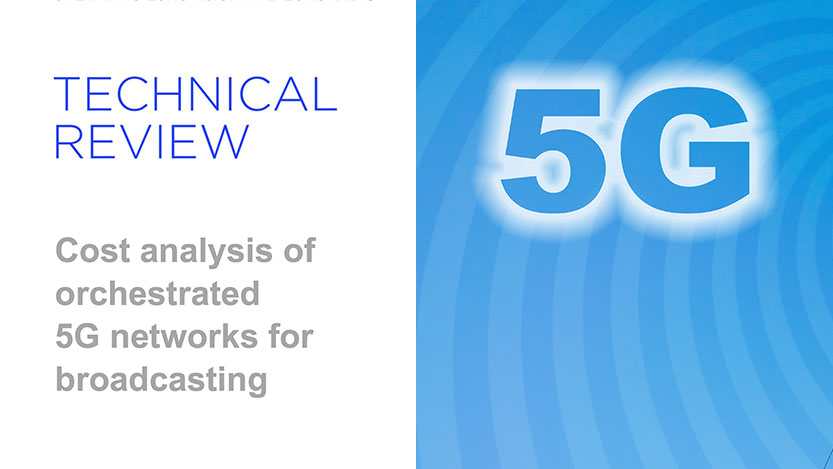 5G is often heralded as a panacea for all connectivity problems of the future. Be it the internet of things, use-cases such as connected cars, or the distribution of media content to mass audiences – the implied assumption is that more speed and capacity will solve all of those issues, and soon.

But not only are there other technical challenges – simple economics also make the above an unlikely scenario. The key requirement for media distribution is wide area coverage. In a recent Technical Review article, titled 'Costs analysis of orchestrated 5G networks for broadcasting', the EBU’s Marcello Lombardo investigated the investments required for two particular deployment scenarios of 5G technology. Lombardo concluded that cellular 5G networks – the standards of which are still being developed – aren’t very likely to reach meaningful coverage before 2030.

The deployment of 4G networks, which started at the beginning of this decade, illustrates the scale and cost of such an endeavour, says Lombardo. Even today, 4G networks don’t achieve anything close to 100% coverage in terms of geography or users, as anyone visiting large-scale sporting events or travelling between urban centres can testify to.

For media distribution at scale, the EBU believes that cellular 5G alone is unlikely to replace existing broadcasting networks in the foreseeable future. Cost, likely deployment timelines, coverage issues, regulatory challenges and current business models would first need to be addressed. It could, however, become a useful complement to existing infrastructures. In addition, the EBU believes that some of the first practical use-cases for 5G technologies in media will be in content production. This may include not only the use of public 5G networks, but also the deployment of private 5G networks in venues.

Combining the strengths of multiple infrastructures

5G as a faster version of 4G wouldn’t overcome many of the limitations of current mobile network setups. The unicast mode of mobile networks – a separate data stream for every user – doesn’t scale well for mass televised events for example. Then there is the issue of coverage, which is particularly visible in rural areas – regions that are, and will continue to be, home to large parts of the population, despite urbanization. Here, conventional mobile network deployments quickly reach their limits.

The EBU is investigating setups that would add broadcast capabilities to 5G, and others that would provide a better fit for the lower population density and larger geographic footprint of rural areas, such as satellite-based 5G, or high-powered 5G base stations installed in existing broadcast towers. Integrating broadcast capabilities and orchestrating diverse kinds of infrastructures for a seamless user experience is technically possible. But there is no guarantee that such technologies will feature as part of the technical standard, nor that business models can be found that support such setups and meet the requirements of all stakeholders.

Therefore the EBU is not only studying possible business models and deployment scenarios of 5G with a view to cost-efficiency. The EBU and its Members are also involved in the development of 5G standards, with a view to making the technology suitable for Member organizations to fulfill their service obligations.

Overall, there are many good strategic reasons for broadcasters to get involved, collaborate and inform innovation in the 5G space – but it’s important to temper expectations, especially on the distribution side.