Submit your nomination for the Technology & Innovation Award 2019 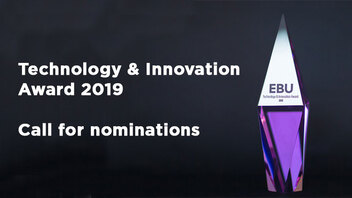 "Every once in a while, a new technology, an old problem, and a big idea turn into an innovation." – Dean Kamen, American engineer and inventor the Segway personal transportation vehicle.

The EBU has issued a call for nominations for the 2019 Technology & Innovation Award. The annual Award is given to teams or individuals for projects that are leading the way, solving a practical problem or delivering great value, either in media production or the services provided by broadcasters to their audiences.

All employees of EBU Member organizations, Associates and Approved Participants, as well as members of EBU T&I working groups are eligible to submit a nomination by 23 April.

The winning project will be announced on 13 June, at the EBU Technical Assembly 2019, hosted by HRT in Cavtat/Dubrovnik, Croatia.

Laureates of the T&I Award are the BBC, France Télévisions, IRT and b<>com for the Next Generation Audio “EBU ADM Renderer” in 2018, Sveriges Radio (SR) for their lightweight IP-based outside broadcast “NXG Project” solution in 2017, and the VRT Sandbox programme for the world’s first fully functional “Live IP Studio” installation in 2016.

Credit where credit is due

Recognizing that broadcasters need to continuously innovate in order to remain relevant, and that relevant innovations can’t always be bought off the shelf, the Technology & Innovation Award seeks to reward projects based on the following criteria:

To qualify, nominated projects must have been completed or reached a major milestone in the two years prior to the nomination. Winners are selected by the members of the EBU Technical Committee in a blind ballot. (More detail is provided in the T&I Award rules section.)

The Technology & Innovation Award gives its winners recognition for their achievements and offers many secondary benefits: exposure to the technical leadership of the EBU Member community represented in the Technical Assembly; a raised profile in the technology press and on social media; and a spot on the EBU stand at IBC 2019 in September.

Previous winners have benefited from new partnerships and synergies created within the EBU Membership and with commercial entities. Some have gone on to win further prizes. There’s nothing to lose and much to be gained – submit your nomination now!