THE A TO Z OF DIGITAL RADIO NETWORK PLANNING 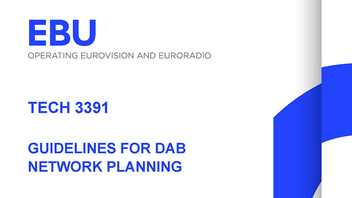 The knowledge available to those planning digital radio networks has been greatly enriched in recent years. Field studies carried out in several countries have contributed to a greater understanding of how DAB and DAB+ networks behave in the real world. A new EBU report, Tech 3391, brings together the latest guidance along with detailed information on deployments and tests in several countries.

The EBU’s first report on DAB network planning was published in 2003. The arrival of DAB+, which brought improvements in audio coding efficiency, led to a further report being issued in 2013. With DAB and DAB+ now widely deployed in different countries and contexts, and with ETSI having revised the DAB standard in 2017, the EBU has updated and enhanced the information in those earlier reports, bringing everything together in Tech 3391.

Among the parameters that have been revised based on the latest test results are those concerning carrier to noise values, receiver antenna gain (especially in cars), allowance for manmade noise and values for coverage prediction, building entry loss and location variation. All of these have an impact on the signal levels for planning, which have been revised.

Other challenges for which solutions are proposed include the provision of uninterrupted coverage in tunnels and the transmission of regional services where the available spectrum for DAB/DAB+ is limited. The report also presents the results of studies on receivers in SFN mode and on Adjacent Channel Interference.

The tests referenced, which are detailed in annexes to the report, were carried out by several different organizations, including IRT in Germany, Rai Way and Rai Research Centre in Italy, SRG SSR in Switzerland, Commercial Radio Australia, BBC in the UK and Teracom in Sweden.