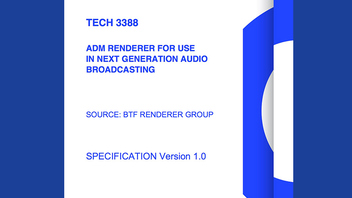 The EBU has published its specification of the EBU ADM Renderer (EAR) for Next Generation Audio – Tech 3388 – and an open-source implementation of the renderer. The EAR is a joint effort of multiple public service media R&D centres organized in the EBU Broadcast Technology Futures group and the "b<>com" institute.

Better audio on any platform

Next Generation Audio is a significant technology improvement adapted to today’s multi-platform media environment. It frees producers from the need to create multiple audio mixes for content by allowing them to deliver a single, multi-purpose audio package instead – which can then be rendered and played back appropriately on anything, from mono devices to sophisticated and fully immersive audio setups. NGA also enables access services such as the option for users to control the relative playback volume of voice commentaries over the rest of the programme audio, a feature often requested by elderly viewers and listeners.

The initiative aims at closing the last major gap in the standards domain for Next Generation Audio (NGA) broadcasting workflows based on ADM content. The EBU believes that providing an open reference renderer for ADM metadata in production, evaluation and monitoring will be beneficial to the health of the Next Generation Audio ecosystem as a whole.

Use cases for the EBU ADM Renderer

The war in Ukaine has highlighted the spirit of solidarity among EBU Members, with Europe’s public service media community going the extra mile to ensure...