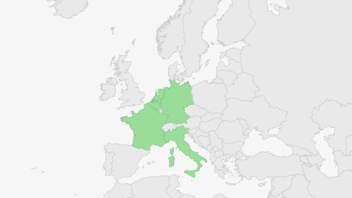 In the second of a series of articles on the progress of Digital Radio across Europe, the EBU’s Radio expert Ben Poor focuses on countries that are moving forward with a 'second-wave' of digitization.

Moving on from countries involved with Digital Switchover (DSO), discussed in the previous installment, are those that are rapidly expanding in terms of their digital radio offering.

Importantly, these countries represent two things: firstly, their combined population of 240 million is just under a third of the total European population; secondly, they form (more or less) a contiguous geographical block within Western Europe, meaning that audiences can find digital radio services as they move across borders.

In 2011, encouraged by broad cross-industry support, a plan was implemented to relaunch digital radio using the newer DAB+ standard. This has had a transformative effect, with a leap in the quality of reception and offering of digital radio services, as well as its success with finding audiences.

Germany is one of the key markets for Digital Radio in Europe, and the federal government has been proactive in bringing together stakeholders to publish a roadmap for digitization. The plan includes recommendations for mandatory inclusion of digital receivers in applicable devices, as well as additional broadcast data services (such as traffic information) and embracing hybrid radio (with broadcast and IP complementing each other).

Notably, a marketing campaign used in Germany to promote DAB+ (“mehr radio”, literally: more radio) has been enthusiastically picked up by other countries. The logo for this campaign, originally produced by the ARD group of public service broadcasters in Germany has also been adopted more widely as a new consumer-facing brand for DAB+.

With a highly effective collaboration between stakeholders, led by a trade body and strongly supported by the government, the Netherlands has seen a huge uptake in digital listening. A strong marketing campaign to promote digital listening has been backed up with improvements to coverage and an expansion of services from both public and private broadcasters.

Digital Radio in the Netherlands seems to be warmly accepted by audiences, and has seen a growing share of listening in homes and in cars. Although 2027 has been suggested as a date for DSO, the government has yet to confirm any roadmap.

Digital radio in Belgium has seen some big changes during 2017 and 2018.

While Flanders has already moved from DAB to DAB+, Wallonia is still in the process of fully moving beyond its initial DAB trials. However, both areas have embraced additional services, including broadcast traffic information and a rich visual slideshow.  Belgian public broadcasters are also enthusiastic supporters of digital radio carried over IP platforms, and using hybrid radio.

France decided in 2014 to build out DAB+ services in several of its major cities – Paris, Nice and Marseille.

Over the years the orginal plan for digital rollout was expanded and accelerated such that the launch of digital radio covering the majority of the metropolitan areas will be complete by 2020. The plan also includes the possibility of launching two national multiplexes, details of which are expected during 2018.

One important detail is an existing law triggering mandatory inclusion of digital reception capabilities in all radio receiver devices, should coverage of digital radio exceed 20 percent of the population. With this figure at 19 percent at the start of 2018, the milestone is expected to be achieved in 2018/2019.

As elsewhere, 2017 and 2018 have bought some important changes to the outlook for digital radio in Italy.

Italy is unique in being the only country to have passed a law mandating inclusion of digital capabilities in radio receivers, due to fully come into force from 2020. It is also undergoing elements of DSO in areas such as the South Tyrol, where FM transmitters are not being replaced alongside a buildout of the digital coverage.

The public broadcaster, Rai, confirmed its support of digital radio with the launch of additional services and a plan to extend coverage along motorways and tunnels.

These countries are not alone in looking to digitize, and are joined by others either in trials or in permanent (but limited) services. There are a number of countries that have yet to put their own plans forward, or have decided that digital radio using the internet is the right path for them.

In the next article, we take a look at some of the ways that broadcasters are moving to digital radio using the low-cost DAB+ broadcast tools.