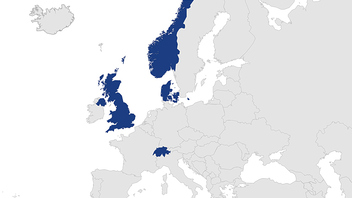 In a series of articles on the progress of Digital Radio across Europe, the EBU's Radio expert Ben Poor examines how the growth in digital listening is driving Digital Switchover (DSO).

The Growth of Digital

While digital broadcast radio in Europe has been around for over 20 years, 2017 saw a leap in the number of available services. Figures from the EBU Media Intelligence Service's Market Insights on Digital Radio 2018 show that the number of digital stations increased by almost 25 percent, including 468 stations that are only available on digital. The majority of these were from non-public broadcasters, indicating an increasing recognition by private broadcasters of digital radio as a cost-effective place to innovate and reach new audiences.

As digital listening grows, so does the case for planning for DSO. A recent EBU analysis of the distribution costs for covering national populations by FM, DAB+ and Broadband showed that digital broadcast using DAB+ was significantly more cost-effective than the alternatives – even when calculated conservatively.

During 2017, Norway carried out their own DSO plan – the first country to do so. A plan to replace national and regional FM broadcasting with DAB+ was implemented region by region, with the Oslo region and the majority of the population completed by the end of September.

Aside from the technical hurdles to ensuring virtually 100 percent of coverage, a large-scale information and marketing campaign was launched in order to prepare audiences for the change. While this created a leap in device sales, and implicitly an economic boost, the work of replacing the multiple devices in homes and installing adapters in cars will continue for some years.

The predicted drop of daily reach as a result of the disruption turned out to be less than expected. At the EBU Digital Radio Summit in February, Travis Baxter from Bauer Media Group, Europe's largest commercial radio broadcaster, predicted that "[by the end of 2018] total radio listening and commercial radio revenues [in Norway] will have increased, and public radio listening will have bounced back. DSO is disruptive and terrifying but it’s going to have been successful for everyone". This bounce may partly be down to an improved number of available national services, from 5 to 29 stations, and new stations for previously underserved audiences.

In recent years, Switzerland has significantly built out its digital coverage, ahead of a cut-off date for DSO by 2024. However, thanks to a close collaboration between government, industry and broadcasters, it is expected that DAB+ will be the main distribution platform from 2020.

As in Norway, success factors have included ensuring new cars are line-fitted with DAB+ receivers, a public information campaign and a partnership between public and private broadcasters. The offering to audiences is strong, with more digital-only stations than those simulcast on digital and FM, and the significant majority of these being commercial rather than public. A particular strength is a regional layer built out using 'low-cost' solutions based on the freely available DAB+ broadcasting tools from OpenDigitalRadio. This has enabled local services to support the move to digital, bringing audiences with them.

Although Denmark currently has one of the lowest numbers of digital-only stations within countries considered as digital radio ‘leaders’, there have been recent discussions on a roadmap for DSO as part of a wider settlement on Public Service Media.

The roadmap proposes a shutdown of FM two years after digital listening exceeds 50 percent, or in 2021 at the latest. Current figures (2018) put this at 37 percent, up from 31 percent in 2015. This has followed a full transition from DAB to DAB+ during 2017, and a reorganisation of frequencies for existing transmitters. As happened in Norway, additional audiences have been found with a new digital-only service targeting seniors.

One of the driving forces of DAB and one of its earliest implementers, the UK still has the majority of digital listening using the original DAB technology, rather than the newer DAB+ that has been adopted across the rest of Europe. The situation is complicated by the continued selling of digital radio devices by major outlets across the UK that have no off-the-shelf support for DAB+.

Despite this, digital listening in the UK is huge, with big seasonal spikes in the sales of home receivers and nearly 90 percent of new cars being line-fitted with a digital receiver. The number of digital-only stations is almost twice the number of its nearest rival, Switzerland, with around 110 stations.

A long-awaited figure of 50 percent digital share of listening across all digital platforms is expected during 2018. This should then meet government criteria defined in its July 2010 Digital Radio Action Plan, triggering a process to "consider a decision on whether to set a date for [DSO]”.

Although commercial broadcasters operate vastly more digital stations, the BBC still accounts for around half of all digital listening time and is one of the key players in any decision on DSO. A widely misreported speech by the BBC's Director of Radio and Music, Bob Shennan, at the recent Radiodays in Vienna struck an optimistic but cautious tone.

Shennan recognised that consumption habits were changing and that broadcasters needed to adapt with that, stating that “new content is one of the great legacies of DAB” and giving examples of new digital-only services that helped to attract new audiences to radio. However, any eventual DSO plan should be “audience-led”, said Shennan, and that currently “audiences are best served by a mixed economy” of digital broadcast, broadband and FM in a 'hybrid' model.

In the next article, we look at some of the "second-wave" of countries - those that are pushing forward with their own rollouts and taking advantage of some of the lessons learned.

editors note: Some details about plans in Denmark have been updated since publication, including the clarification that their DSO plan was still under discussion, rather than finalised.

Cost-benefit analysis of FM, DAB, DAB+ and broadband for radio broadcasters and listeners