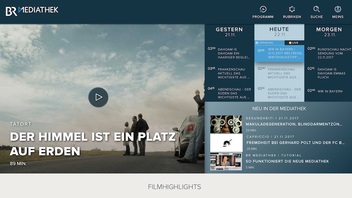 German broadcaster Bayerischer Rundfunk (BR), one of the founders of the PEACH Project, has joined Switzerland's RTS and Portugal's RTP as a user of the project's Recommendation Pipeline, Single Sign-On and Data Scientist platforms. The organization launched its new BR Mediathek content discovery platform on 20 October with personalization features driven by the solutions.

“User personalization – delivering relevant content to the right user, at the right time, on the right device – is becoming essential for broadcasters to reach their audiences”, says Michael Barroco, Head of Software Engineering at the EBU, noting that interest among public service media in the solutions continued to grow.

The systems are collaboratively developed by several public service broadcasters under the umbrella of the PEACH Project ("Personalization for Each"), which is managed by the EBU. The distributed development group uses the Scrum working methodology and applies InnerSource principles. BR is a main contributor of development efforts to the project.

The deployment of the systems in BR Mediathek is an important milestone and validates the project’s collaborative model, which allows participating organizations to leverage the PEACH team’s combined expertise for development, deployment and operations, keeping time to market low while maintaining a high level of adaptability.

Moving to the next level

To strengthen the PEACH team's co-development framework and support activities, Sébastien Noir from Swiss broadcaster SRG has now joined the project. Noir brings a wealth of experience to the group, which he gained as Product Owner of the online video platform SRG Play. "Recommendation is not a feature, it is a journey", says Noir.

Noir previously also helped to lay the foundations for the PEACH team's co-development activities as chairman of the EBU Strategic Programme for Agile Software Collaboration. The Programme launched the EBU Code Exchange Platform code.ebu.io and defined the licensing model that is now used for code-sharing between Members.