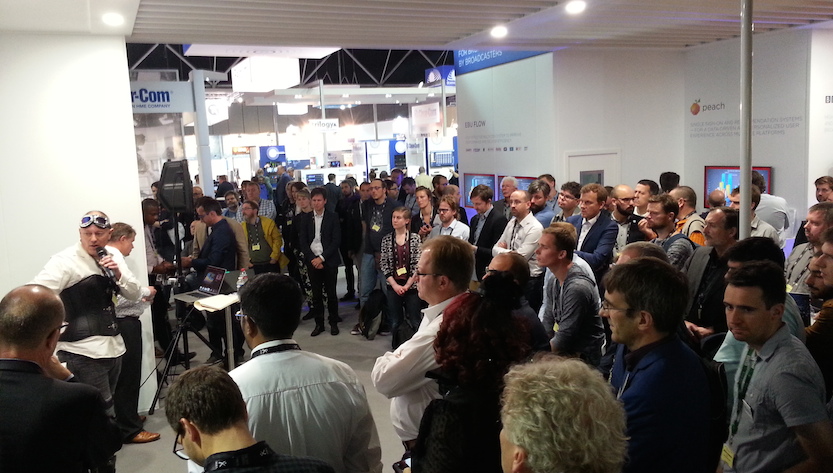 Saturday afternoon at IBC 2017 saw technology experts from across the exhibition converging at the EBU stand to discuss their shared passion. The annual Open Source Meetup has grown year-on-year, providing an opportunity for a catch-up on the latest developments in open software-based solutions for media. More than 100 IBC exhibitors and visitors attended this year's gathering.

A set of lightning talks offered ample evidence of the tangible benefits for broadcasters and vendors alike in embracing open source. This year's talks clustered around production workflows and video coding, with both new initiatives and updates on familiar projects. Contributions from EBU Members were to the fore, with organizations such as NRK, Swedish Radio, RTS, BBC and CBC/Radio-Canada among the presenters. All slides are available for download.

The popular FFmpeg family of video-related software came up in two of the presentations. A CBC/Radio-Canada project has focused on supporting the new SMPTE ST 2110 standard (for transport of professional media over managed IP networks) in FFmpeg. Although facing performance challenges with high bitrates, the project code now incorporates support for raw video.

The second FFmpeg-related talk concerned a project, supported by the EBU and NRK, to support Sony's XAVC format. The resulting tests showed positive results for almost all of the most commonly-used editing tools.

One of the highlights of the EBU stand, drawing a steady stream of impressed visitors, has been the demonstration of Swedish Radio's new platform for remote radio broadcast. The team behind the project aims to make as much of the software as possible freely available for download and use by the wider radio community. At the Open Source Meetup they presented their codec call manager (CCM), the heart of the IP-based contribution network. It enables live calls to audio contribution devices and provides a dynamic directory service to all codecs.

Other talks related to production workflows included an update from Streampunk Media on their collection of IoT modules for enabling stream-based professional media production and a service-oriented architecture approach that uses the Mule open source Enterprise Service Bus (ESB), presented by Switzerland's RTS.