Tech-i 33: a radio revolution, drones in Norway, AR returns and much more 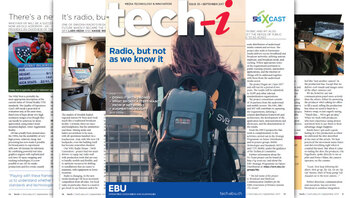 Swedish Radio's much-admired NXG radio backpack adorns the cover of the latest issue of tech-i magazine, now available for download. Radio features strongly in this edition, along with Augmented Reality, drones, IP production and much more besides.

It's a few years since Swedish Radio embarked on a project to optimize technical resources while at the same time providing production staff with modern, flexible equipment. The project came to fruition late last year with the first pilot installation for their NXG Radio House at their P4 West regional station. It has been a remarkable success, popular with staff and generating interest across the industry. It picked up the EBU Technology & Innovation Award last June. You can read the full NXG story in tech-i.

Staying with radio, the EBU's project manager for digital radio, Ben Poor, explains how the Strategic Programme for Radio is bringing EBU Members together to help shape radio's future, both in terms of distribution and the user experience. Radio distribution also comes up in the usual article from the EBU's Media Intelligence Service, with revealing insights into the demise of Medium Wave and the growth of DAB+.

In addition to the article from Swedish Radio, there are two others from our Nordic Members. Jon Krosby, a pilot in NRK's aerial photography group, describes the Norwegian broadcaster's pioneering use of drones in live productions. From neighbouring Sweden, we learn about SVT's project to take control of increased streaming costs by building its own hybrid CDN.

Looking more generally at developments in Europe, there are reports on two new EU-funded projects where the EBU is playing a leading role. The MediaRoad project aims to strengthen collaboration around innovation in media. EBU Members are encouraged to get involved in one or more of the three project hubs, focusing respectively on innovation, policy and network-building. Another new project, 5G-Xcast, includes participation from the EBU, BBC and IRT, helping to ensure that future 5G standards meet the needs of public service media.

There are two opinion pieces in this issue of tech-i. David Wood, in his usual column, turns his thoughts to the question of how best to evaluate the quality of images and audio. And Markus Ostertag, responsible for business strategy and project coordination at SWR, sets out the requirements broadcasters have for a successful transition from SDI to IP.

With much discussion of Virtual Reality, but not much clarity on what it might mean for broadcasters, the EBU's Paola Sunna takes a look at another 'reality' that's coming back to prominence, Augmented Reality. With many new tools appearing on the market, including in consumer devices, the EBU is investigating if and how they can open the path to developing engaging AR experiences.