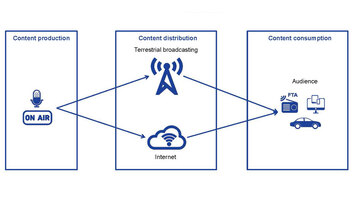 While mobile broadband may serve a purpose for radio distribution in limited circumstances, particularly until smartphone manufacturers enable FM and DAB* reception in their devices, the analysis demonstrated that it cannot compete with DAB when it comes to cost. Indeed, while mobile broadband compares well to FM for radio distribution, the study found that, at all but the very lowest population densities, DAB radio is the most cost-effective distribution platform.

The paper was written by the EBU's Marcello Lombardo, who first presented the results of his study at the EBU Digital Radio Summit. (EBU Members can access a video of his presentation by signing in to the website. Note that the figures have been updated since the presentation was delivered in February 2017.) In setting out to do a cost-benefit analysis of radio technologies, he looked at both broadcasters and audiences. For the former, the distribution infrastructure requires both capital expenditure and operational expenditure. For listeners, he took into account both fixed costs (such as a broadcast reception licence, ISP charges) and, especially for mobile reception, data use and other charges.

*As in the Technical Review article, the use of the term DAB here refers to both DAB and DAB+.