Digital Radio Seminar focuses on DAB advancement in the Balkans 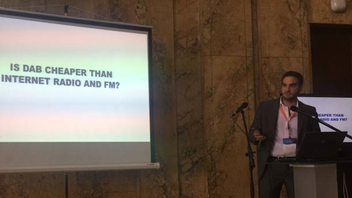 The EBU's Marcello Lombardo at the Digital Radio Seminar in Belgrade

The EBU has partnered with Radio Serbia and WorldDAB to host the Digital Radio Seminar in Belgrade (8 June).

The event, held at the Radio House, brought together senior representatives from the Serbian media sector - government, regulators and broadcasters.  Also present were EBU Members from Bulgaria, Croatia, Romania, Hungary, Macedonia, Slovenia, Montenegro and Bosnia & Herzegovina, demonstrating the interest across the broader area in moving forwards with the implementation of DAB.

After a welcome from Radio Director, Milivoje Mihajlovic, the Chief Technology Officer of Serbian Radio, Zorana Bojicic, presented the ambitions of Serbia to move radio services into the digital environment.  The radio sector is flourishing in Serbia, but the FM platform is full, and space is needed to bring further innovation.  In their strategy DAB+ will become the national standard, guaranteeing stability of transmission and opening the door to a richer listener offer.

EBU Head of Radio Graham Dixon talked about the need for a media platform to be stable, open, economical and attractive.  "Digital radio provides a completely reliable platform," he said. "It also opens the door for new services, which can be attractive to audiences, and all at relatively low cost."

Bernie O’Neill from World DAB noted that developments were happening across Europe, and moving increasingly fast, with a succession of news, including the increased speed of French rollout, and the legislation being discussed in Germany around obligatory digital capability in receivers. She also underlined the importance of mutual learning and sharing expertise within the digital radio community.

The seminar also heard from Yvette Dore from Digital Radio UK who emphasized the continuing attraction of live radio, showing that in the UK this accounted for 77% of audio consumption; she also noted the rapid growth in the UK of in-car listening. Digital listening was approaching 50% in the UK; the new multiplex is proving successful, and small-scale digital radio is now progressing.

NRK's Jørn Jensen offered perspectives on the ongoing Norwegian Digital Switch Over, which had been successfully progressing across the different provinces throughout 2017. He emphasized the long history of DAB in Norway, the importance of collaboration between public and private broadcasters, and the conditions that needed to be met for switchover.  More than half of the Norwegian public uses one of the stations which would not have existed without digitization.

Bojan Ramšak from RTV Slovenia, shared his country's experience where DAB+ broadcasts began this year; this included information on the reasonable prices for transmissions, which have facilitated the entrance of both public and commercial stations to the digital arena.

EBU Technology and Innovation's Marcello Lombardo (above) also presented his detailed research on the relative costs of distributing radio via DAB, FM or internet, showing the economic advantages of digital over analogue, while demonstrating that IP-only delivery would be prohibitive, both for broadcasters and listeners. Clearly the ideal is preserving the broadcast backbone, while building attractive low-data hybrid features.