Resilient but forced to innovate – EBU Radio Days in Tunis 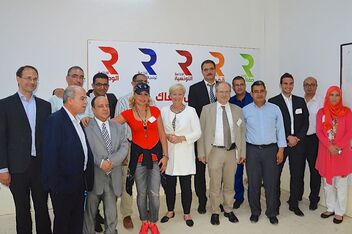 The EBU has again been active in supporting North African Members in their efforts at moderating TV and Radio services. Following on from a very successful ASBU Arab Festival for Radio and Television, the EBU's Director General Ingrid Deltenre and the Technology & Innovation department's Marcello Lombardo were part of a high level delegation hosting the EBU Radio Days 15-16 May in Tunis, an event held in conjunction with Tunisian Member organization Radio Tunisie.

The North Africa region has known many changes to its media landscape over the last few years, but radio continues to hold a special place. With its Members in the region, EBU experts were addressing the problem of transitioning to digital radio, hybrid radio and how to bring a more engaging radio experience to social media.

Radio is a very resilient platform, and with turbulent times in many countries, remains a trusted source for disaster alerts and news. But it’s facing challenges like never before and needs to address younger audiences in ways that appeal to them. The EBU undertakes to serve all its Members with a view to helping them address their needs, and continues to foster the community of strong public service media principles.

Sharing knowledge and experience between Members

The EBU Radio Days in Tunisia represent another milestone for knowledge sharing across EBU Members and hold the promise of more vibrant offerings from broadcasters in the region in the near future. The EBU has been heavily engaged in on boarding Members to the RadioDNS platform and offers as set of hybrid radio tools on ebu.io. Headquartered at EBU’s HQ in Geneva, the WorldDAB Project has been leading the digital radio transition around Europe. Many EBU Members have been at the forefront of the deployment of new technologies going back to RDS, which now underpins analogue radio around the world.

EBU delegate Marcello Lombardo and a group of regional experts also took "a look into the future of radio and TV technology for Arab broadcasters" at the ASBU Arab Festival for Radio and Television, held 26-29 April in Hammamet, Tunisia. During a panel discussion on future transmission strategies, Lombardo pointed out that DTT and PMSE currently coexist on European UHF bands and that a loss of that spectrum would be seen as endangering free access to PSM. Lombardo predicted that DTT would continue to exist until at least the year 2030.