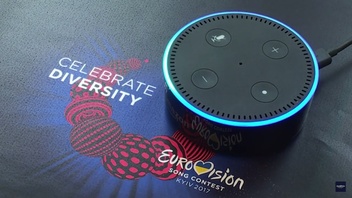 Users can simply ask in English or German: "Alexa, ask Eurovision who won in" a particular year. Alexa will then ask users if they want to hear the winner and can play the winning entry. Users can also "Ask Eurovision, when did France (or other nations) last win", or "When is the Grand Final" as well as "Who has won the most" and "Which countries have never won", amongst other combinations.

Amazon Echo owners in the UK will also be able to listen to a live stream of the Eurovision Song Contest Grand Final through the skill via EBU Member BBC.

Simon Fell, Director of Technology & Innovation, said: "The EBU is always at the forefront of innovation and with the growth of voice-controlled devices such as Amazon Echo we wanted to create a tool that provides added value to our flagship co-production. In time we hope to develop the 'skill' to allow users to delve even deeper into the Eurovision Song Contest's rich history."

Every year the Eurovision Song Contest gains more fans as they discover the world's biggest entertainment show", added the EBU's Director of Media Jean Philip De Tender. "This new skill allows those new to the event, and loyal followers alike, to discover all the great winners from the past and test their friends and family on how much they know about the Song Contest too."

Echo owners in the UK, Germany, Austria and the US with an Amazon account can enable the skill at these links: UK, DE/AT, US.