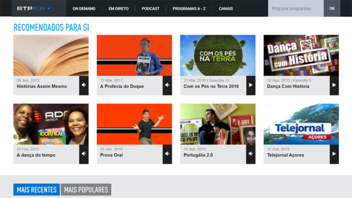 An automated recommendation system developed by EBU Members, first deployed in December 2016 by Switzerland's RTS, is now also live on the website of Portugal's RTP. The PEACH system – Personalization for EACH – is the result of a highly collaborative process involving a development team spread throughout Europe.

The work of the PEACH team takes place under the auspices of the EBU Technical Committee. Two Members – Bayerischer Rundfunk (BR) and Radio Télévision Suisse (RTS) – initially took the lead in dedicating developers to the project. Their aim was to quickly co-develop a data pipeline and software solution that would enable broadcasters to easily implement personalization.

The goal of PEACH: "The right tool for editorial teams to recommend the right content at the right time to the right person on the right device."

The team uses SCRUM methodology, an agile software development framework that involves working in short "sprints". Team members include frontend and backend developers, a data scientist, a Scrum Master, and the product owner, along with the two stakeholders. Their work began in October 2016, and the system was up and running on the RTS website within three months.

Portuguese broadcaster RTP has been able to leverage the work of BR and RTS to deploy the recommendation system on its website, while BR is working towards its implementation on the BR Mediathek. The PEACH team itself is expanding: RTP are contributing to further development and other Members are set to join soon.

Future work will centre around user profiles and preferences and notifications. As the tool becomes more widely used among EBU Members it is hoped that anonymized exchange of data will enable increasingly accurate recommendations. Questions of data handling and privacy are foremost in discussions, with a core principle being to give users complete control over how their data is used.

Any EBU Member can use the system and all Members are invited to contribute to the further development of PEACH.

PEACH adheres to the principles of InnerSourcing, applying lessons learned from open source software development. The EBU is proud to host the InnerSource Commons Summit on 18-20 April.