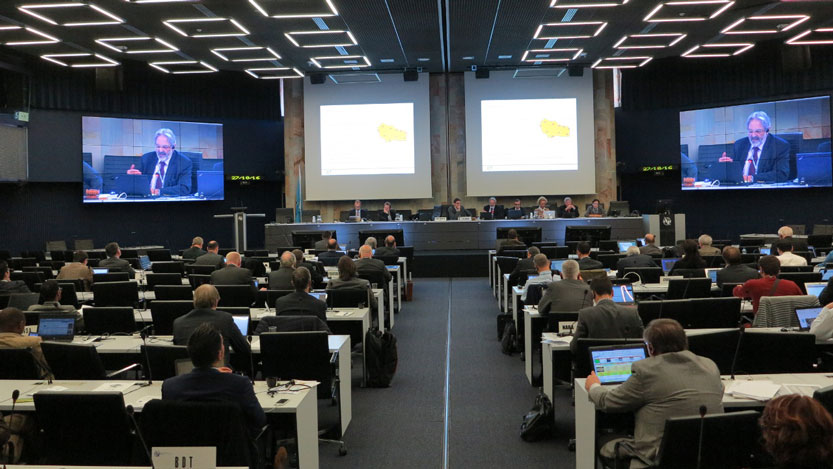 ​A workshop  to discuss and share practical experiences related to DTTB implementation took place successfully at ITU HQ in Geneva on 27 October. Jointly organized by the ITU,  the EBU, Broadcast Networks Europe (BNE) and the DVB Project, the workshop focused on licensing and business models, network specifications, quality of service and receiving equipment specifications.

ITU Secretary-General Houlin Zhao said that the workshop "provided an excellent opportunity for dialogue among stakeholders in public and private sectors and in the TV industry". His colleague François Rancy, Director of the ITU Radiocommunication Bureau, emphasized that, given DTT's unique social and economic opportunities, "governments, broadcasters and other industry stakeholders should collaborate to the maximum extent possible in order to accelerate its roll out."

Terrestrial television (analogue and DTT) remains the backbone to free-to-air TV access and the most widely used means of receiving television globally, although television programmes are also available on other platforms such as satellite, cable and IPTV.

The workshop was chaired by the EBU's Marcello Lombardo, who presented research from IHS indicating that almost 200 million European households were able to receive DTT in 2015. "81 million households rely on DTT as the main platform to receive TV," he continued.

Despite the success of DTT, many countries around the world are yet to complete the digital switchover process. To help promote the win-win scenario that successful DTT offers, ITU, EBU, BNE and DVB have embarked on a process to share knowledge and bring experts together from around the world to facilitate the introduction of DTT in countries still reliant on analogue TV.

A new ITU-R Handbook on DTTB Networks and Systems Implementation was recently approved by ITU-R Study Group 6 (Doc 6/74) . This Handbook will be soon available at: www.itu.int/pub/R-HDB/en

On 23-24 November, FORECAST 2016 takes place at EBU headquarters in Geneva, focusing on the latest developments in broadcast technologies. It's a key annual event for anyone involved in the implementation of Digital Terrestrial Television. View the complete programme and find registration information here.