New hope for DTT in Turkey? 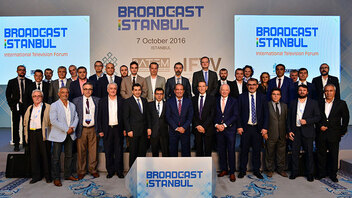 At the recent Broadcast Istanbul International Television Forum, the EBU outlined the opportunities that Digital Terrestrial Television (DTT) could bring to Turkey. The event, on 7 October 2016, was jointly organized by the Turkish Ministry of Culture and Tourism, RTÜK (the Turkish regulatory body for broadcasting) and the country's Professional Association of Radio and Television Broadcasters.

Satellite is currently the dominant distribution platform in Turkey, relied upon by 80% of households. EBU representative Marcello Lombardo, along with DVB's Executive Director Peter Siebert and speakers from Funke Digital TV and Kathrein, emphasized the wide use of DTT across Europe. They explained how it can deliver services and quality that compare well with both satellite and cable, with the added benefits of mobile reception, regional content and simple installation.

Analogue switch-off has not yet taken place in Turkey, but it remains unclear whether a DTT network will be rolled out. It is hoped that the recent conference, which was attended by around 100 participants, can stimulate new momentum towards ensuring that Turkish audiences can experience the many benefits of a modern DTT platform.