All you need to know about ATSC 3.0 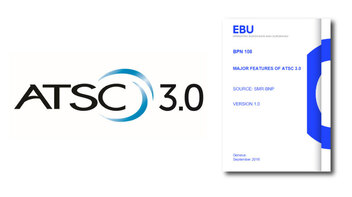 A new report from EBU Technology & Innovation, BPN 108, outlines the major features of ATSC 3.0, the next generation terrestrial broadcasting system developed in the USA.

Two decades after the FCC adopted the first Advanced Television Systems Committee (ATSC) system in the USA, their next generation broadcasting system is emerging as ATSC 3.0. It is the first broadcast system with a built-in IP backbone. ATSC 3.0 merges over the air signals with broadband platforms so broadcast content is available in a variety of receivers from large TV sets to tablets and smartphones.

The system is much more robust than its forerunner, which makes it more adapted to reception indoors and on mobile devices. And with the fast arrival of higher resolution pictures with higher sound quality, it also offers a large choice of modulation schemes to be able to deliver, in a 6 MHz channel, the larger data capacities that UHDTV requires.

Other extensions to the current standard are interactivity, personalization and the facilitation of new business models such as t-commerce, localized and personalized adverts, etc. All this makes ATSC 3.0 a more flexible broadcast system capable of addressing new and challenging scenarios.

ATSC members have just ratified the Link Layer Protocol and Audio and Video Watermark Emission standards to be part of the ATSC 3.0 suite of 20 standards and recommended practices. The three new standards join two others (the Physical Layer and System Discovery and Signalling standards) already approved by ATSC members.

The FCC is expected to soon start preparing the legal framework for broadcasters to introduce ATSC 3.0 in the USA. South Korea has also recently adopted ATSC 3.0 and plans to start implementation early in 2017. It is expected that the first consumer receivers will become available by the end of 2016 or early 2017. The primary focus is on producing receivers for UHD services, as this is the first target for the Korean broadcasters.

The future of terrestrial broadcast systems, including many issues considered in the ATSC 3.0 specifications, will be covered at FORECAST 2016 on 23-24 November at the EBU in Geneva. Register now!