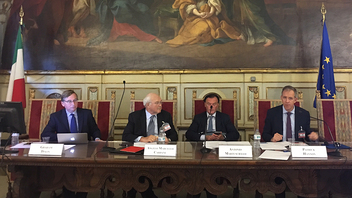 The EBU’s Head of Radio, Graham Dixon, has emphasised the importance of maintaining a robust, reliable and contemporary platform for radio transmission in the future at a seminar on digital broadcasting in Rome.

At the event organised by Italian regulator AGCOM at the Italian Parliament, Dixon noted sadly, “we have seen during the past years emergency situations and attacks in major European centres of population – Paris, Nice, Brussels, Munich. These are the times when people most need reliable information, and when any IP solution is most likely to fail due to overload, or even the necessity to curtail service to protect the public.”

“DAB solutions are immune not only to such events, but also to potential hacking,” he continued. “For most people, and for many hours each day, radio is entertainment, information and company, it can also be the lifeline in our increasingly mobile societies. The opportunities which digital radio offers harmonise well with the EBU values, around universality of service, diversity of voices and promoting innovation. There are also economic benefits for consumers, manufacturers and the media sectors, which cannot be fully realised until adoption is fully consistent across Europe.”

Also speaking at the seminar the President of AGCOM, Angelo Marcello Cardani, described digital radio as an 'opportunity for citizens, the market and business' and proposed that it would be a major step forward if the government, as for television, would impose the obligation to bring to market digital receivers. He spoke of the central place which car listening occupies, and called for the commitment of the automobile industry, for whom there were special advantages, such as enhanced traffic and emergency information.

The seminar underlined a clear statement of intention on the part of AGCOM, with Cardani stating that we do not intend digital radio to remain unlike 'unfinished like a building site', rather the work that has been started needs to reach its natural conclusion. Implementing digital radio is part of bringing the country up-to-date.