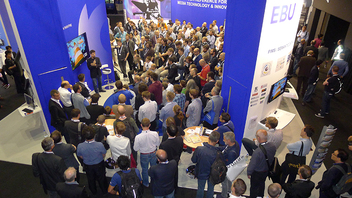 Exactly 10 years ago, Motion Graphics Artist Jonas Hummelstrand posted a message on a web forum. It read “In 15 minutes the Swedish election TV-show airs, and we'll be outputting a lot of real-time graphics directly from Flash!” Jonas was excited. He stood at the cradle of something new, but he probably had no clue how big his baby would turn out to be. Jonas is the main person behind CasparCG, the open source professional graphics and video play-out software developed by Swedish public broadcaster SVT. This year, a decade after its conception, CasparCG was used for the Eurovision Song Contest graphics, including all of the animated votes counting. CasparCG performed flawlessly, answering the first question people always ask about open source: “Is it really fit for broadcast?” Since May 2016 the answer is: “Yes, although it has not been proven with a live audience larger than 204 million yet.”

10 years is also approximately the period that the European Broadcasting Union has been tracking open source developments in the broadcast industry. In that time a lot has changed. Open Source software has become a ‘de facto’ part of our life.  Without realising it we are using it many times a day; whether hidden in our phones or more explicitly exposed as the browser of our choice.  Without open source many innovations would never have happened – at least not with the speed with which they have happened. But the big change is not the proliferation of open source, which it must be said most often is still hidden in our particular industry. It is the way people think of its merits and dare to speak about it. Where in previous times, presentations on this topic would be met with scepticism and disdain, the past two years have shown the topic attracts audiences: Maybe not the traditional sceptics, but open-minded youngsters. It is not for nothing that innovative companies such as Google and Netflix play the open source card well. It allows them to get the best developers and speed up their own innovation cycles. What they have understood is that programmers like to share their work and have an enthusiasm for what they have created, like Jonas did with CasparCG when he wrote that early blogpost in 2006.

To learn what open source projects thrive in our industry now, visit the EBU Open Source Meetup at Stand 10.F20 on Saturday 10 September at 16:30. For more information on the event, see: tech.ebu.ch/oss-meetup-2016.