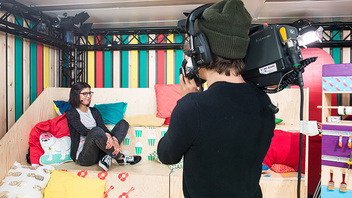 Image courtesy of VRT
The European Broadcasting Union (EBU) and Belgian public broadcasting company VRT announced today that the fully IP-based live production set-up developed as part of VRT Sandbox LiveIP Studio project has been used since the first time on June 20, 2016 for a live on-air broadcast. The set-up is being used for the live section of the VRT’s children’s channel, Ketnet, at the request of the production team, which was impressed with its flexibility and performance during earlier phases of the project. It will be used throughout the summer for live, outside broadcast on the channel.
Started in the summer of 2015, the VRT Sandbox Live IP is the world’s first proof of concept of a complete live production that relies exclusively on IP. Driven by Belgium’s VRT and the European Broadcasting Union and powered by a long list of partners including Axon, D&MS, Dwesam, EVS, Genelec, Grass Valley, Lawo, Nevion, Tektronix and Trilogy, this venture has developed a fully functional IP production studio. Using existing open standards SMPTE 2022-6, AES67/RAVENNA, PTP and OpenFlow, this venture demonstrates a high level of interoperability and leverages the unique benefits of IP to create efficiencies such as remote production and automation.
Karel De Bondt, Project Manager of the LiveIP project explains: “The LiveIP project was originally designed as multi-phased proof-of-concept, but following the remote production and the live-multicam debate we did earlier this year, the VRT production team approached us asking to use set-up for a real, live broadcast. They told us they were really impressed with the flexibility offered by the much reduced complexity of the IP set-up compared to the equivalent SDI set-up. This is obviously a real endorsement of the capabilities of the LiveIP set-up, and proof for the whole industry that IP and IT technology can indeed be used for live production, with the full support of production professionals.”
The VRT Sandbox LiveIP Studio project recently won the 2016 EBU Award for Technology & Innovation and is shortlisted for the prestigious IBC 2016 Innovations Awards, in the Content Creation category.