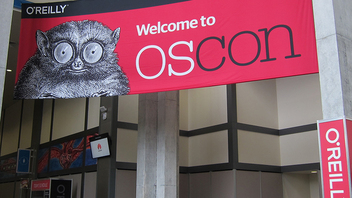 Credit: O'Reilly Conferences, OSCON 2016
With the complexity of distributed systems on the rise, the Open Source community is focusing on gaining a common understanding of the technology involved by sharing code, best practice and experience.
The champion of this year's OpenSource Convention (OSCON) in Austin, Texas was clearly Docker containers. The numbers are impressive: 50+ repositories, 2,000+ contributors, 18,000+ GitHub issues, and 1,200+ patches/month. Docker containers are becoming the standard to manage LXC containers. It allows developers to build and reliably ship code in a modern open cloud infrastructure.
Interoperability is key and a few projects are emerging as industry standards, such as OpenStack for infrastructure as a service which is now able to federate different cloud providers in order to share resources. Regarding container orchestration, we see two major options under development: Kubernetes strongly pushed by Google and Docker Swarm supported by the core Docker team.
Regarding Big Data, Google recently open sourced Tensorflow, a framework to run machine learning and Neural Networks processing. Neural Networks can be used to extract at scale analogies between texts and concepts and image recognition. However, it requires a deep understanding in machine learning in order to operate such system. For a quick introduction to Neural networks, click here.
To help you navigate the event, we have put together useful links to workshops and on EBU.io.
Regarding transport, HTTP/2 (H2 as it is sometimes called) is now available on usual web servers such as Nginx and Apache as an option. HTTP/2 is backward compatible with HTTP/1.x and its main benefits include multiplexing of requests, which can drastically improve performance. This is particularly important for mobile users. According to Davey Shafik from Akamai, “Performance equals user experience and therefore every millisecond has an impact.” Image compression is critical and can be evaluated using DSSIM which retrieves a score reflecting the perceived quality that a human can see in order to select the correct compression parameters (This algorithm won an Emmy award). A useful metric to evaluate the experience is the SpeedIndex Performance of your web user interface. It can be computed using the webpage test tool.
Introduced by Paypal at EBU DevCon last year, Innersource is spreading among organizations. The whole idea of Innersource is to adopt the rules of the Open Source Community inside an organization. As Panna Pavangadkar from Bloomberg said "Transparency is the default mode. You will have to go through several administrative steps if you want a private repository." Key KPIs for engineers and managers in these organizations are the number of pull requests on a particular project sent by external teams and the age of the pull request. Finally, like a cowboy, the CTO of Docker took to the stage and ‘open sourced’ the components live, which makes Docker run natively on Mac computers built by the Unikernels team.