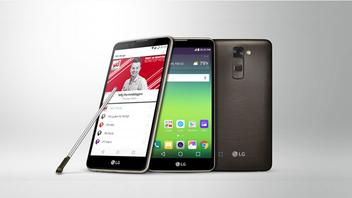 The European Broadcasting Union (EBU) is proud to be part of the launch of the first smartphone with built in digital radio capability.
As a pioneer in digital radio and a member of the International DMB Advancement Group (IDAG), the EBU played a key role in ensuring that the broadcast community are firmly behind the LG Stylus 2 with DAB+.
EBU Head of Radio Graham Dixon took part in the launch of the new smartphone at the world’s largest radio conference, Radiodays Europe, in Paris on 14 March.
Dixon said: “The EBU has campaigned for many years to include DAB capability in smartphones. Traditional radio apps use huge amounts of data for streaming, DAB+ lets users listen to the radio for free and in excellent audio quality – this breakthrough will allow broadcasters to reach even more people with their content.“
Digital Audio Broadcasting covers 500 million people in 40 countries around the world, with users able to access more radio channels with DAB+ than traditional FM.
Senior Project Manager Mathias Coinchon from the EBU’s Technology and Innovation department worked with IDAG and LG to bring the broadcast community together and provide technical advice during the development of the phone:
“Digital and hybrid radio standards are important in making a rich user experience. Both broadcasters and vendors have worked together to ensure open access to the phone’s radio tuner so that broadcaster apps can exploit the functionalities in the tuner,” he said.
Coinchon added: “Smartphones have become the everyday device for media consumption. By integrating a digital radio tuner in such a device and giving access to the tuner from applications developed by broadcasters, we open up opportunities for all sorts of innovation on top of the usual broadcast services. The benefit for the listener is that the radio experience is still simple to use free and doesn't consume your data plan. Broadcasters will also now be able to associate their online/on-demand content in an easier way and add interaction and personalisation.”
Users in Germany, the UK, Netherlands, Belgium, Italy, Norway and Australia will be the first to receive the LG Stylus 2 with DAB+.
As the world’s first smartphone with DAB+, the LG Stylus 2 features a DAB+ chipset and an exclusive app that allows customers to enjoy digital radio broadcasts out of the box. A technical interface also enables broadcasters to develop their own tailored apps in which internet services complement broadcast radio channels.
“We are proud to help introduce a game-changing smartphone with an innovative company like LG. The combination of broadcasting and the internet opens up a vast array of possibilities for the future,” said Gunnar Garfors, president of IDAG. "Consumers get new functionalities and media companies reach new audiences with more broadcast free-to-air radio."
“We are taking a proactive approach towards the fast-paced technological shift to digital radio broadcasting and have equipped the ‘LG Stylus 2’ with DAB+ to deliver a new paradigm of experiences through a smartphone,” said Juno Cho, president and CEO of LG Electronics Mobile Communications Company. “We are committed to delivering enriched mobile experiences that align with our customers’ needs and changing market trends.”

IDAG (International DMB Advancement Group) is a non-profit organization that promotes, facilitates and coordinates DAB+ initiatives around the world. IDAG counts 25 members from 17 countries in Europe, Africa, Asia and Oceania. More on www.theidag.org.