Autonomic networks are the future 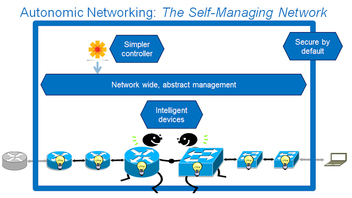 The second day of the EBU Network Technology Seminar 2015 started on time with several tutorials, one of which dealt with the issue of synchronizing IP networks using the IEEE 1588 based Precision Time Protocol (PTP). Speakers from the BBC and Oregano Systems explained how PTP systems will, for a large part, be self-configuring and can guarantee nanosecond accuracy. But they also warned that broadcasters will still require adequate testing and monitoring to guarantee glitch-free performance in practice.

Michael Behringer (Cisco) dared to go a step further. At NTS 2015 he predicted we will see self-configuring, self-optimizing, self-healing and self-protecting networks, simply by buidling in "a little bit more intelligent into devices, so they can talk to their peers and the controller does not have to tell them everything". This would push the management of networks to a higher abstraction level, making it simpler for humans to perform. Instead of spending a large part of their time specifying the normal, default behaviour, network administrators would focus on the exceptions.

Behringer further claimed these future networks will be "secure by default", while every protocol would secure itself without asking for configuration. Sounds too good to be true? What certainly is true is that humans are a weak parameter in the security equation. As Andreas Schneider (SRG-SSR) reported earlier the same day, 60% of staff is likely to 'click on' phishing e-mails, 10% of which will happily provide their username and password as well. Combine that with the 'less than optimum' security often seen in broadcast equipment and you have a recipy for big surprises!

If you prefer predictability over surprises, you should reserve the dates for next year's NTS in your calendar now: 21-22 June 2016.