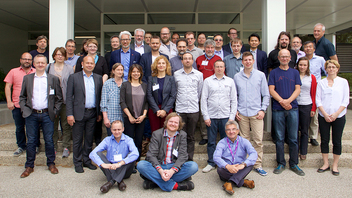 Metadata is increasingly being recognized as a strategic topic. This was confirmed by the attendance figures of (and feedback on) the recent EBU Metadata Developer Network (MDN) and Automatic Metadata Extraction (SCAIE) workshops. Together they attracted more than 60 participants and speakers over three days. One of the prime reasons for the growing interest in metadata is the desire to improve the efficiency of content production.

As Maarten Verwaest (Limecraft) showed at the MDN workshop, well-designed script-based collaboration can reduce the costs of re-using content. And not only that, it can improve the quality of the products as well. Norwegian EBU Member NRK is well aware of the value of a metadata-powered integration, as was clear from the update on the NRK Origo project provided by Tormod Vaervagen. This project aims at a complete reorganisation of the NRK's radio and television infrastructure, the metadata layer of which uses the EBU CCDM and EBUCore standards.

Another way of improving efficiency is by using automatic speech and image recognition technology. This can be especially useful for archiving and translation purposes. At the SCAIE workshop, Petr Vitek (Czech TV) showed how automation can help improve the accessibility of the broadcaster's services. Suzanne Weber (BBC) and Peggy van der Kreeft (DW) explained how automatic translation can help translate the broadcasters' content into the approximately 30 languages they offer their content in.

Many other topics were addressed, check out the presentations for more. And you may already want to update your calendar metadata, too. The next MDN workshop will be held at the EBU in June 2016.