Android TV seems to be about apps not TV 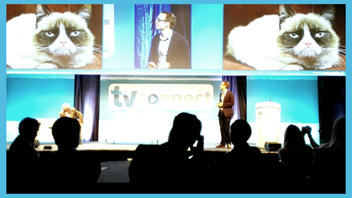 At TV-Connect Thomas Riedl, Google’s Global Head of Android TV Partnerships presented the new Android TV operating system that replaces their previous Google TV approach. Google will position the Android TV in more or less the same way as Android in the mobile market. There was little to no talk about linear TV channels but the presentation concentrated mostly on applications.
As usual, Google positions their business lead operation as an open platform. Their main arguments concentrate on low barriers for application providers to develop for their platform, the generic SDK for all device owners who want to integrate the OS and the opens source character of the software allowing integrators to investigate and adjust it in their own environment to a certain extend.  These factors have proven to be a success in the mobile world and will probably create a better uptake for Android TV than the Google TV that never really took off.
There are subtle differences from the mobile world. For example, device owners will be able to brand the OS but will not be allowed to block Android TV applications from the Google store. At the same time, the bar for the app developers was raised using more restrictive specifications to force them to create optimized products for the TV and demotivate too simple porting from other device classes like tablets.
Recommendations are managed by Google. Riedl explained that content providers can suggest which recommendations they find relevant for their applications like linear TV-services. These are aggregated and presented on the screen by Google. According to him, search and recommendation is a core competence of the internet company. By logging in using a Google account, the end user will get access to personalized services.  One can wonder in light of the current competition accusations of the EU with regard to their search engine business, if these recommendations will be favourable for the end user or for one of the richest companies in the world.
Android TV will fully support the Google Cast protocol. It will be possible for end users to push from applications supporting this specification on their mobile, tablet, PC or laptop content to the TV. An element that Riedl expects to be very popular.  The first TV supporting Android for TV will be from TP Vision on the Philips TV 2015 models.