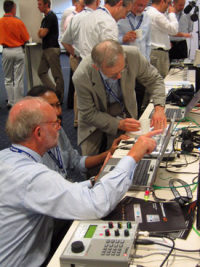 The 2008 EBU Networks Seminar was titled "Media Networks in Action", with as core theme the relentless migration away from dedicated media networks to the use of general-purpose IP networks to support media production and broadcast, which is growing at an escalating pace.

Several demonstrations underlined the developments taking place in this area.

EBU Groups in the spotlight

Important devlopments, included the work of the EBU Groups on contribution over IP of audio (ACIP) and video (VCIP), but also various types of compression, the topic of quality control and transport engineering in facilities were discussed.

For more information on EBU TECHNICAL activities on network technologies, have a look at all the EBU Groups  starting with the letter  'N' (from Network). Networks 08 q - Bringing the BBC's Networks into the 21st Century Networks 08 n - Getting News to Base Networks 08 m - ENG Application: The use of COFDM Networks 08 g - Video Contribution over IP - What's it all about? EBU Members can download individual presentations of this event from the Publications Library .