In November 2012 the EBU Technical Committee approved a Recommendation designed to give technical aid to broadcasters who intend to assess new lighting equipment or to re-assess the colorimetric quality of lighting in their television production environment. This recommendation was developed by the LED Lights Project Group, under the EBU Strategic Programme on Beyond HD.

The introduction of high efficiency LED lighting has given rise to a number of unintended and possibly expensive consequences for both television and film production. Studies already undertaken had shown the lighting industry colour-rendering index to be inappropriate for television because of the floating white point. The aim of the LED Lights Project Group was to show how these studies could lead to the design of a “Standard camera” model, much along the lines of the human CIE “Standard observer” ..

Knowing its performance limitations in advance can help in the choice of luminaire (or light), identifying the potential extra cost of colour correction in post-production as against the cost saving in power consumption of high-efficiency luminaires, such as LED lights. An assessment of the performance limitations of a given luminaire can be based on a mathematical calculation implemented in software, the “TLCI-2012”, or Television Lighting Consistency Index, specified in EBU Tech 3355.

Rather than assess the performance of a luminaire directly, as is done in the Colour Rendering Index, the TLCI mimics a complete television camera and display, using only those specific features of cameras and displays which affect colour performance. The TLCI is realised in practice using software rather than real television hardware. The only hardware that is required is a spectroradiometer to measure the spectral power distribution of the test luminaire, and a computer on which to run the software analysis program to perform the calculations.

Knowing the performance of your LED lights you understand what to do in post production in order to correct any deviation of colours.

The EBU has published TLCI-2012.zip Software* to provide guidance.

The first set of independant lighting measurements have been done using this software.

You can download them here or by clicking on the image below.

*Please note the selection of lights used in this zip. file is given for the convenience of users and does not constitute an endorsement of the product. 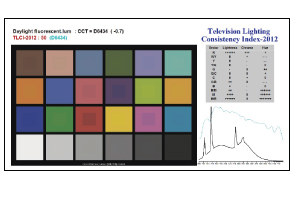 *The latest software version is 2.018 (November 2018), which contains many new features for the Engineering user but does not alter any of the important calculations.

The TLCI-2012 software can be downloaded from this website using the link below. It can also be found via the Publications library.

By default the software runs in "user mode", which will be sufficient for the needs of any broadcaster that wishes to evaluate their exisiting lights. However, for those who need to change the parameters beyond standard usage patterns, an "engineering mode" is available.