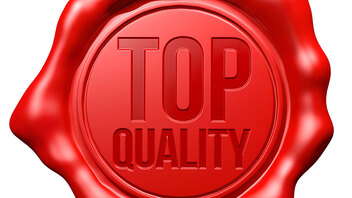 Last week, at IBC 2013, the EBU published the first release of its QC Criteria (EBU Tech 3363) developed by its Strategic Programme on Quality Control. EBU Tech 3363 is a large collection of QC checks that can be applied to file-based audiovisual content. Examples include the detection of visual test patterns, loudness level compliance checks, colour gamut verification, looking for image sequences that may trigger epileptic seizures, etc. This collection of QC tests can be seen as a 'shopping list' which media professionals can use to, for example, create their own delivery specifications or establish test protocols for archive transfer projects.

Each QC Criterion in the list features a definition, references, tolerances, and an example, to help users reproduce the same tests with potentially different equipment (e.g. think of a broadcaster who receives material from a wide range of post production houses). Obviously such information can get quite technically detailed. That is why the EBU group decided to present the overview of QC Criteria in a tabular format, similar to the well-known Periodic Table of chemical elements. Several characteristics support this metaphor, including the concept of specifying the tests as 'atomically' as possible, the fact that some tests posess (much) more complex properties than others and the idea of categorizing them into groups with similar characteristics. For the EBU QC Criteria these are: audio, video, format/bitstream and metadata/other.

During IBC 2013 the Periodic Table of QC Criteria was shown not only at the EBU stand, but also at those of ten vendors actively participating in the work. Many broadcasters, post-houses and other industry professionals were exposed to the EBU QC work and the related FIMS QA activity. The feedback in Amsterdam was very positive. The QC group will meet end of September/early October to evaluate the feedback received,  to work towards the finalization of the second batch of tests and to start work on related topics such as best practices for where exactly to position QC in broadcast operations.

You can download the table here . Full details
are available in EBU Tech 3363 v0.9