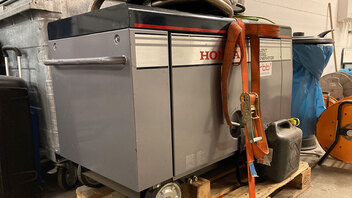 The life-or-death difference made by the availability of reliable, trusted information has come into sharp focus throughout the ongoing war in Ukraine. However, the conflict has also highlighted the spirit of solidarity among EBU Members, with Europe’s public service media community going the extra mile to ensure their colleagues in Ukraine can continue their essential work.

It is no surprise that that the television tower in Kyiv was among the first targets of Russian missiles in early March. While a control room was hit and terrestrial television and radio services went off air, the public broadcaster, UA:PBC, was able to quickly revert to back-up transmitters using a secondary tower on the other side of the city. As the war intensified, both terrestrial and satellite-based resources were progressively disrupted or taken over. Key production facilities were relocated to Lviv, in western Ukraine.

A request for support from the EBU was met with a major mobilization of efforts across the membership. Eurivision News, Euroradio, and Eurovision Services all spring into action. The EBU’s Technology & Innovation Department quickly moved to coordinate several actions to support UA:PBC, playing a key role in helping to ensure that its services could remain on air.

At least 13 EBU Members from across the continent stepped up to provide assistance in the form of essential equipment. This included everything from cameras, microphones and mixing consoles to newsgathering kits, satellite uplink stations and even generator trucks.

The logistics involved in getting the equipment to Ukraine were highly complex and typically involved a collective effort from volunteers and local authorities, with coordination both from the EBU and representatives of UA:PBC.

Georgy Kostiukevich, who in peacetime is responsible for coordinating radio outside broadcasts for the Ukrainian broadcaster, said he took hope from the community effort: “When we saw how quickly our colleagues from other EBU Members stepped up to the challenge, we knew that we were not alone in our efforts to keep Ukrainians informed. The solidarity shown by our peers across Europe has given us hope and confidence.”

Both the EBU and its Members also reached out to equipment vendors to source additional equipment. Several commercial companies lent their support through the donation of essential production and distribution gear, including transmitters.

Antonio Arcidiacono, the EBU’s Director of Technology & Innovation, believes that beyond the heartening display of solidarity within Europe's PSM community, there are lessons to be learned: “The incredible mobilization of EBU Members and the wider media community to provide urgent assistance to UA:PBC must now be matched by a redoubling of our efforts to build advanced collaborative network solutions, that will provide stability and long-term certainty. Our media distribution networks should be regarded as critical national infrastructure, broadcasting a fundamental means of reaching the entire population of a country.”