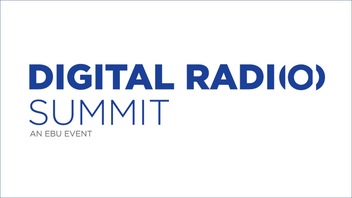 Several trends and messages came through loud and clear at the Digital Radio Summit 2021: The Android Automotive system is set to be widely adopted among car manufacturers and thus efforts to ensure that broadcast radio is fully supported in the open-source platform are critical. Shifting listening away from third-party platforms and into unified, broadcaster-controlled apps is a growing priority for public service media. And metadata remains essential to providing the personalized and engaging user experiences radio must offer.

Opening the event, EBU Technology & Innovation Director Antonio Arcidiacono said that radio will continue to be successful if it innovates. iHeartMedia's John Vermeer said that an audio revolution is upon us and that radio broadcasters, with the scale and reach of their broadcast services, are uniquely positioned to drive discovery of their on-demand content. This message was echoed by Radio-Canada, which has seen impressive growth in engagement with both live and on-demand content on its Ohdio app.

Radio-Canada, NRK and VRT all talked about the importance of bringing listeners to their own dedicated audio platforms. For the Canadians, this has represented a move away from the earlier "hyper-distribution" approach of making content available on as many platforms as possible. They found that people were indexing and even monetizing their content without them being aware of it. Third-party use of content is now primarily built on partnership agreements.

For Sveriges Radio, a similar story is reflected in the evolution of how the broadcaster's open API is managed. When it was launched 15 years ago to feed third-party platforms with SR content, there were minimal rules and restrictions. More recently, as the audio environment has started to change, there has been a need to establish clearer ground rules. Users of the open API are now required to ensure that material is only linked or streamed, not republished; there must be clear attribution to SR; the content must be easy to find; and various requirements around monetization, marketing and user data.

Always on the agenda, but more important than ever, metadata again emerged as a key concern. For Radioplayer, which has expanded into six new countries in the last few years, quality metadata is key to ensuring an excellent user experience. It is also the key to groundbreaking new functionalities offered on the SWR radio app, where the ability to skip tracks, time-shift and listen to music on-demand are finding favour with a growing user base.

NAB's John Clark said that Android Automotive is projected to be in 36 million vehicles by 2030. The association has convened a global group of stakeholders to speak with a unified voice to Google. The goal is to ensure there is proper support of broadcast radio – both digital and analogue – in Android Automotive's open-source platform so that the functionality is available to all developers. Connected cars have become a high priority focus at Radio France also, where a holistic approach is taken to ensure that Radio France, through its app, can retain prominence on the connected car dashboard, the in-car voice assistant, and mirrored smartphones.

presentations and videos from the Digital Radio Summit 2021