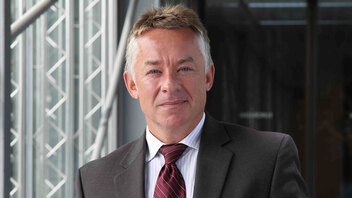 The SMPTE standards organization has elected Hans Hoffmann, Head of Media Fundamentals and Production at the EBU, as its new president for the 2021-22 term. On 1 January, Hoffmann will become the first European in the history of the organization to serve in that role.

The position also further strengthens the EBU's ties and partnerships with the wider entertainment industry. The Society of Motion Picture and Television Engineers is based in the US and operates as a global professional association of engineers, technologists, and executives working in the media and entertainment industry. Its work underpins many of the technologies used by media organizations around the world.

Hoffmann, a SMPTE Fellow, joined the Society as a young engineer and progressed through roles leading standardization groups, acting as chair of various technology committees, and serving as a Board governor for the EMEA Region, vice president of standards, and vice president of finance before becoming executive vice president. He has been involved with SMPTE, the EBU, the ITU, and other international standards bodies throughout his career, and more recently with newer groups including founding the Inter-SDO, an informal but valuable group of international standards bodies that meets regularly to compare work.

Hoffmann was also recently awarded the FKTG’s Richard Theile Medal 2020 for outstanding services in television technology. The honor recognizes his services in the development of HDTV and UHDTV television systems and his significant contribution to international standardization committees.

“It’s an honor to be elected to this leadership position at SMPTE,” said Hoffmann. “I look forward to collaborating with the fantastic SMPTE team in White Plains, the SMPTE Board, and the SMPTE membership to identify the Society’s gravity points — strengths and areas we need to develop to grow now and in the near future. We have a world of opportunity ahead of us, and we need to be agile in positioning the Society to delve into the areas that address the rise of the cloud, IP, remote workflows and media creation, artificial intelligence and machine learning, software in place of hardware, and personalization and ‘immersiveness’ in media consumption.

“Equally important, we need to consider the perspectives of younger generations of media professionals and engineers and provide them with purpose and solutions that will help carry them forward. While SMPTE already is a global organization, we will continue to think more broadly and work more closely with industry and partner organizations worldwide in delivering concrete initiatives that speak to the interests and needs of our diverse industry. I am thankful that the EBU is supporting this important post, as it will obviously bring mutual benefits to user organizations and industry.”