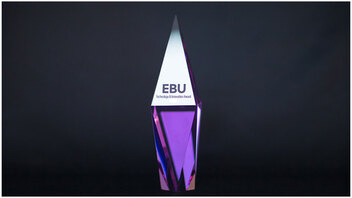 France Télévision's winning project was the development of an AI system that helped news data journalists distil key information from election debates taking place all over France and relate this information to users.

Antonio Arcidiacono, Director of the EBU’s Technology and Innovation Department said: “The large number and quality of the projects submitted shows that even in these difficult Covid-19 times, the skills and creativity of our Members’ engineers have not been checked”.

All winners of the Technology & Innovation Award were announced at the EBU Technical Assembly, held virtually for the first time this year, on 6 October.

The NPO development of an AI-driven system for the automatic creation of media subtitles, YLE's "Mojos" suite of tools for mobile journalism (affectionately ‘Mojos’), and a BBC trial to allow viewers to adjust the relative levels of television audio to their needs, were also presented at the Technical Assembly and awarded a certificate as runners-up.

Each year, EBU Members submit candidate projects that meet given criteria and will have a major impact on broadcasting for the Technology & Innovation Award. The nominations and the winners reveal many of the frontiers of ideas and technology of EBU Members.