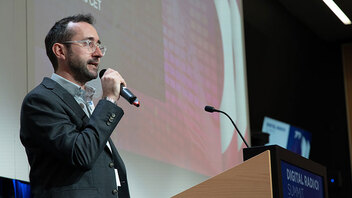 The EBU's Ben Poor at the Digital Radio Summit 2020

Over 100 radio executives and professionals from around the world attended the Digital Radio Summit 2020 (12 February) and two related conferences, held at EBU headquarters in Geneva, to discuss opportunities in podcasting, in-car listening and new distribution plaftorms.

Although confirming that linear broadcast radio currently still has the lion’s share on consumption, there was a renewed sense that collaboration amongst broadcasters will be essential in order keep radio prominent on the car dashboard.

In-car listening, a stronghold for radio, is also where the industry is facing some of its biggest challenges. A case in point is Android Automotive, which will be the de-facto operating system of around half of all new cars sold. Android Automotive delivers a unified app experience, but a very fragmented and unattractive radio one.

There was more conversation this year about Radioplayer being the broadcast industry’s response to the rise of new audio platforms, and wide agreement among supporters and detractors that the industry should be ‘collaborating on technology and competing on content’, with open and globally agreed data standards such as RadioDNS playing a key role in maintaining an attractive experience.

Effective routes of communication for broadcasters and manufacturers are key, and a special Automotive Workshop held alongside DRS provided some ideas on how this could be improved.

Many broadcasters already have relationships with car manufacturers, but the ability to speak alongside others with a single unified voice will be vital to compete with the likes of Apple and Spotify – both of whom were reported as having interfered with radio content branding on their platforms.

For more information and to get involved, contact Ben Poor poor@ebu.ch.

Presentations and videos from the Digital Radio Summit 2020