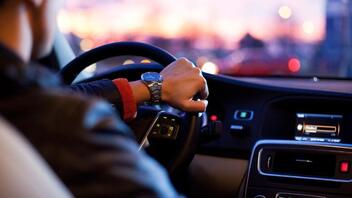 As mobile data connectivity and voice control become more common features in cars, live broadcast radio continues to be by far the most popular source for entertainment and information on the road, a recent study commissioned by the EBU shows.

Automotive data connectivity received a boost in 2018, partly due to European legislation mandating a connection for safety purposes, and partly also due to an increasing ambition on the part of manufacturers to provide internet-based services to their customers. This adds to connectivity established through mobile phones,  that are tied in to the car’s entertainment system via Bluetooth audio or platforms such as Android Automotive or Apple CarPlay. These trends are expected to increase in pace during 2019 and beyond, opening up a valuable new market for in-car media and entertainment.

With in-car listening being a key part of broadcast radio consumption – especially in countries such as Finland, Italy and Portugal, where the car is the primary place for radio listening – the question is: What effect is increasing mobile data connectivity having on radio consumption?

To help give an answer to this question, the EBU commissioned an online survey from GlobalWebIndex, involving 1000 UK-based people aged 16 to 64, to ask how they currently consume content within their car.

Of the respondents who say that they drive a car at least once a month, 71% regularly listen to live radio, ahead of CDs or cassettes for 37%, and streaming services for 33%.

While half of car drivers still rely on FM/AM transmission, one third has adopted digital radio. With DAB+ digital radio now being included as standard on almost all cars sold in the UK (ahead of European legislation mandating digital terrestrial broadcast reception in all new cars sold across Europe within 2 years), this shows that awareness of digital radio in cars is rising. 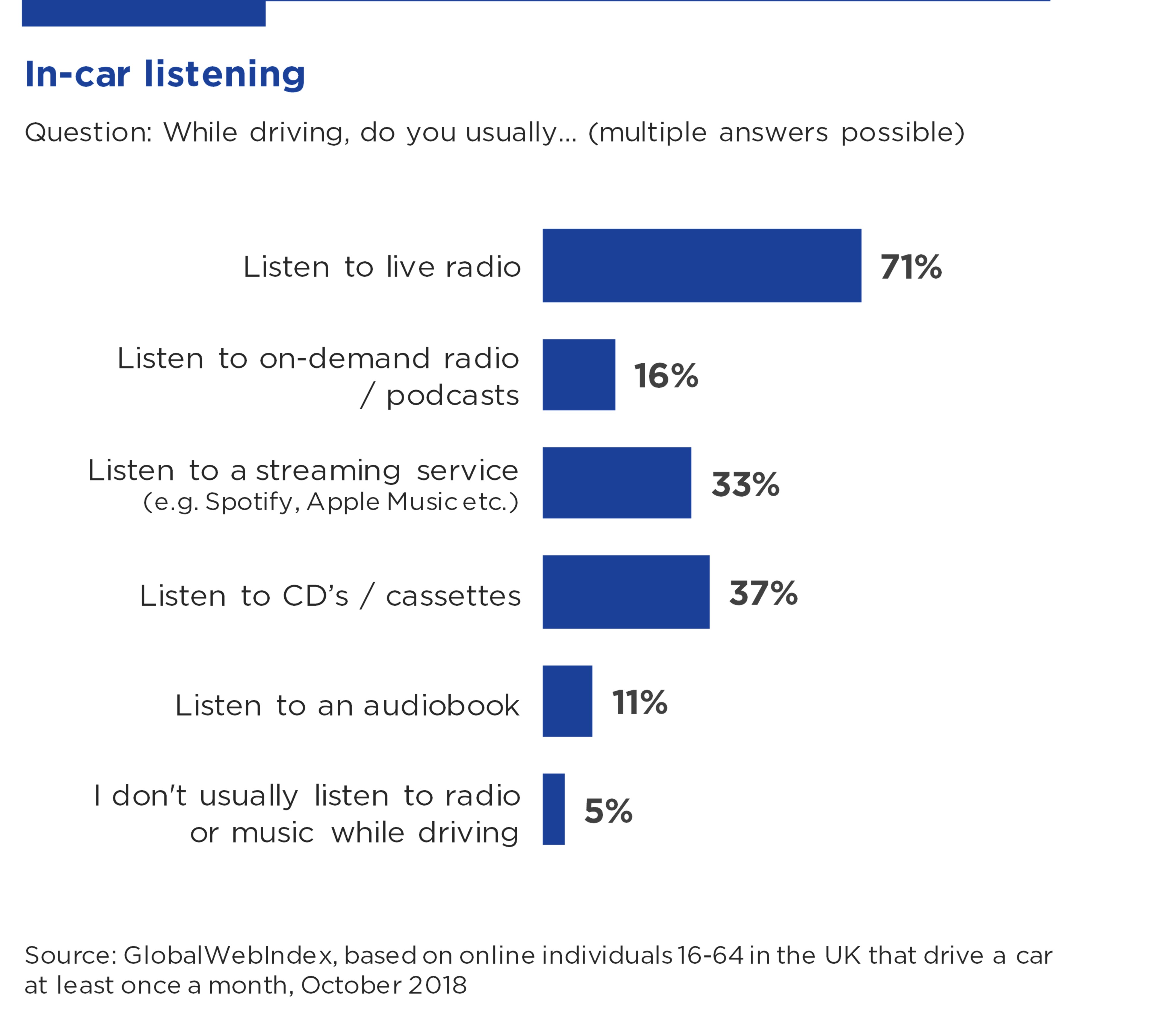 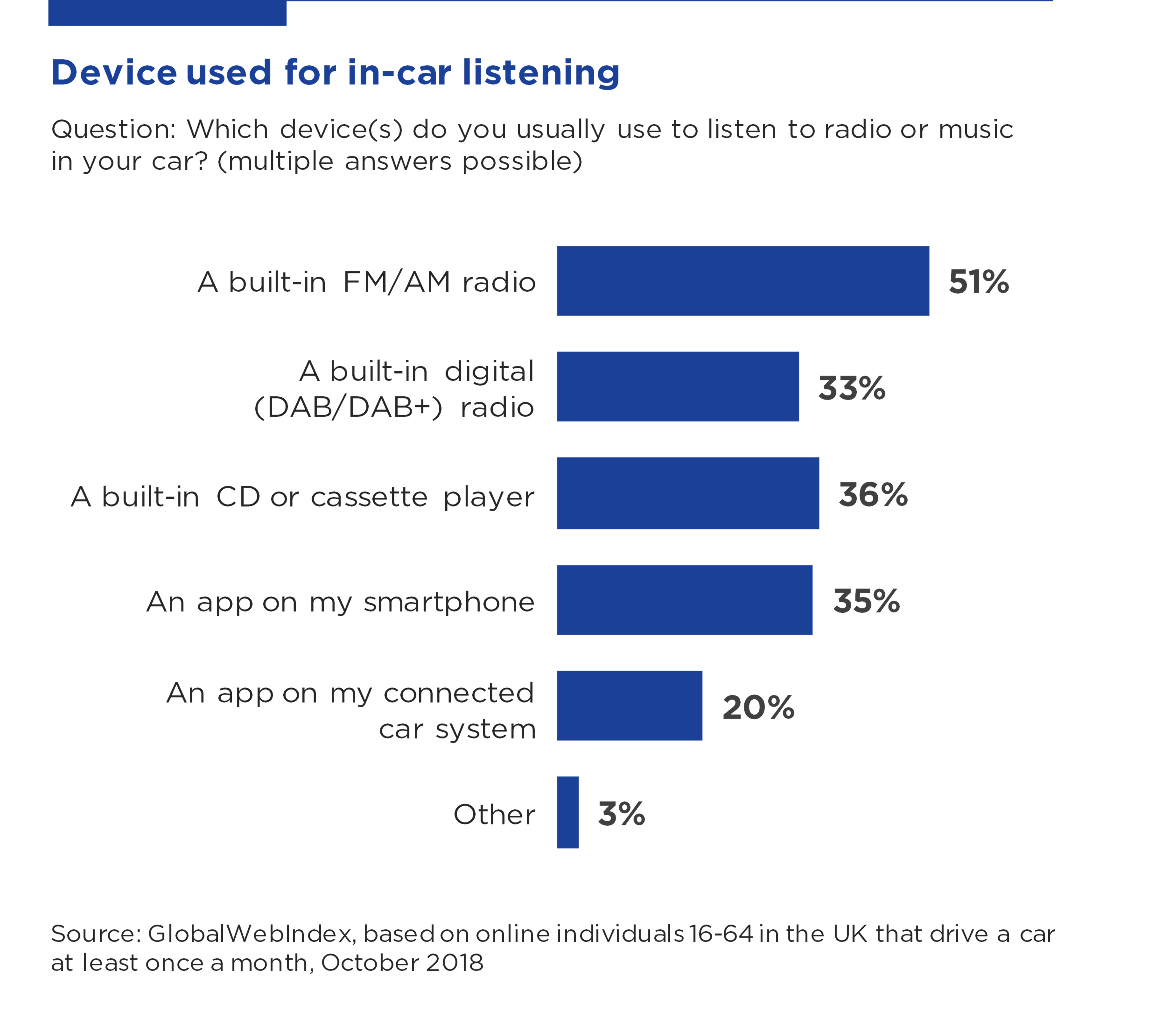 Internet in cars is quickly becoming the norm

40% of regular drivers have a connected car, with 24% connected through their smartphone and 16% as a platform embedded in the car. In terms of operating systems, Android Auto has a slight edge powering 32% of connected cars, trailed by Apple CarPlay (28%) and other manufacturer platforms (24%). Despite cars becoming increasingly connected, current listening behaviours suggest that this has yet to change how drivers use the in-car infotainment ecosystem. This market could become more fragmented as additional platforms such as Alexa (either embedded in the car or as the Amazon Auto after-market adaptor) starts to appear on more car models.

Voice control is an area that Alexa could show its strengths. The survey asked respondents whether they used voice-control for any particular tasks while driving. Half of all drivers said they used voice-control, mainly for making or receiving calls (34%), to play music (22%) or to command the navigation system (22%).

The conclusion is that live broadcast radio (increasingly through digital radio) is still the most popular form of entertainment and information for drivers. While increasing connectivity in the car, as well as integration with voice-controlled digital assistants, may be on the horizon, there is still a way to go to convince consumers to switch.

* Editor's note: An original version of this article incorrectly communicated a result of the survey, suggesting that a 71% share of all listening in cars was live radio. We've corrected the statement to reflect that 71% percent of drivers regularly listen to radio.