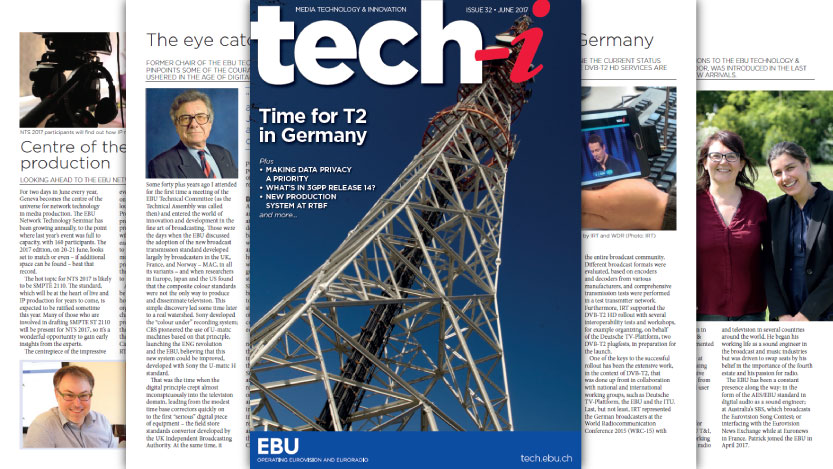 A photograph of the Munich-Freimann transmission tower graces the cover of the new issue of EBU tech-i magazine, highlighting the launch of DVB-T2 in Germany last March. IRT's Kerstin Pfaffinger and Klaus Merkel describe how this next generation of terrestrial television in Germany has taken shape. With HD images, enhanced services thanks to HbbTV and new options for mobile reception, the new platform may stimulate increased interest in a country where DTT remains far behind both satellite and cable/IPTV distribution.

The issue of how data is handled by media organizations comes up in two articles. NetApp's Sheila FitzPatrick, a speaker at the recent EBU seminar on media cyber-security, explains why broadcasters need to start thinking seriously about the topic of data privacy, while the EBU's Media Intelligence Service presents the results of its recent survey on EBU Members' data strategies.

Elsewhere in the June 2017 issue of tech-i, you can find a report on the successful EBU engagement with 3GPP to ensure broadcaster requirements would be included in the latest release of the specification, an overview of Belgian broadcaster RTBF's new production system – called NUMPROD 2.0 – and a report on a new joint initiative to share DTT expertise with ITU Region 1 countries that have yet to shut down analogue services.

Finally, the magazine includes a pair of complementary articles from two of the longer serving members of the EBU's technology community. Former Technical Committee chair Aleksandar Todorović looks back at some of the television technology milestones of the past fifty years, while David Wood, in his usual column, wonders how media technology might look fifty years into the future. One hundred years of insight from one issue of tech-i – definitely worth a read!