Personalization, Multi-CDN delivery and FM switch-off in Norway – all in tech-i 31 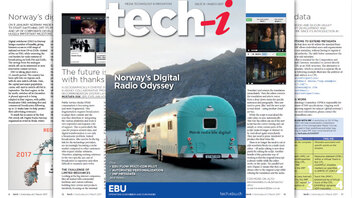 The latest issue of our quarterly magazine, tech-i, is now available for download. Within its pages you will find news of FM switch-off in Norway, two important collaborative projects involving EBU Members, one focused on Multi-CDN delivery and another driving an automated recommendation system that's now live in Switzerland. And – as usual – much, much more!

A peach of an idea

Visitors to the website of Swiss broadcaster RTS – and soon also users of the BR Mediathek – benefit from tailored audio and video recommendations thanks to a new platform developed by the EBU PEACH team. With a name derived from the phrase 'Personalization for EACH', the team worked in a highly collaborative manner, using Scrum methodology to pool expertise. In the magazine, Michael de Lucia (RTS) and Mustafa Isik (BR) explain how the project evolved.

Another cross-organizational project that is set to deliver real benefits for Members is the recently launched EBU Flow platform. It is a Multi-CDN pilot project, aiming to provide technical, operational and business-related findings around the effectiveness of such an approach to content delivery. Project leader Bram Tullemans explains how the platform has been constructed and sets out the opportunities for Members.

The cover of the March 2017 edition of tech-i features a beautiful photograph (courtesy of Radio.no) of a caravan travelling the highways and byways of Norway. The roadshow pictured is part of a huge public information campaign in the Nordic country to ensure that the switch-over to an all-digital radio network runs smoothly. WorldDAB President Patrick Hannon provides an overview of how the process is unfolding and highlights some aspects that he sees as being crucial to its success.

And beyond the cover story on 'Norway's Digital Radio Odyssey', radio also features strongly elsewhere in this issue of tech-i. There is a look back at some of the key messages to emerge from this year's Digital Radio Summit, an introduction to Ben Poor, who will shortly join the Technology & Innovation team as our new radio expert, and a report on radio listening patterns from the EBU's Media Intelligence Service.

As usual, the magazine features a number of reports on recent technology developments. Pierre-Anthony Lemieux is a leading expert on IMF, the Interoperable Master Format, so we're delighted to publish his outline of options for extending the standard basic metadata that is used with the format. We also hear from BBC's Susanne Weber, the driving force behind a smart new tool that greatly simplifies the production of translated videos, and from her BBC colleague Martin Thorp, who sets out some ideas around improving the integration of Digital Terrestrial Television with in-home networks.

Finally, our regular contributor David Wood asks how far we might be able to go in making media more immersive, introducing the concept of Kirari, while it is the turn of EBU Technical Committee member Galina Fedorova to be featured 'in the spotlight'.