IP production infrastructure - is it ready for take-off? 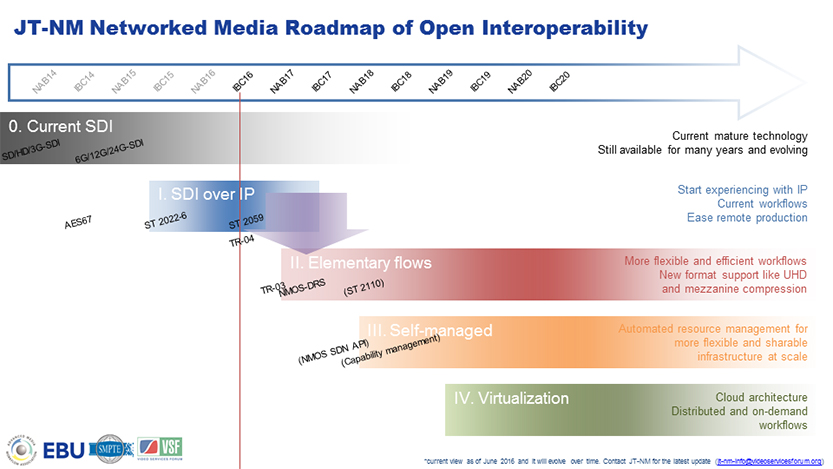 We have taken it for granted for years that the future of content production lies with ‘IP’, with all its benefits. The exciting news is that we are now passing from theory to practice.  One of the major proof-of-concepts trials has been that of the Belgian broadcaster VRT, LiveIP.   In addition, RTL in Luxembourg has announced its IP project, RTL-city.  And the news at NAB April 2016 was that most broadcast equipment manufacturers are now offering IP enabled products in their catalogues.   Added to that, we see an increase in new players coming from the software and internet industries.

That said, IP-based technology is still evolving, and new standards are still being developed.  Some vendors are also offering their own proprietary solutions.   Why?   One reason is that standardisation is a slow process, and there is undeniably a demand out there for immediate solutions.

There are many different alliances and partnerships promoting particular solutions.  One example is Sony’s IP Live community, which promotes the Network Media Interface – NMI. Another is the SMPTE Registered Disclosure Document 37,   promoted by Aspen.  This focuses
on media transport over IP driven by Evertz.  AIMS promotes a roadmap made up of SMPTE standards and VSF specifications.

Basing the system on the modular design of the IT world – the OSI model (Open Systems Interconnection) is the key to achieving the flexibility needed, though it comes at the cost of greater complexity.

There is a most important pre-requisite for many broadcasters - they need for components to be available from multiple vendors – they need to avoid ‘captive markets’ and to maintain competition in the market.

In order to help the broadcaster-members of the European Broadcasting Union, an EBU working group has drawn up what it believes will be the evolution of the technology over the coming years. The ‘roadmap’ (see Figure below) was welcomed by many organizations, and has been adopted by the Joint Task Force on Networked Media (JT-NM).   The Figure indicates the future ’generations’ of IP infrastructure.

The current mature technology for interoperability is the Serial Digital Interface (SDI). This technology is still evolving, with new 6G and 12G-SDI and multi-link capability that enable even higher bitrates to support Ultra-High Definition (UHD) formats.  We will see this technology around for many years, and many users – in perhaps business critical uses – will continue to rely on it for a number of years to come. SDI is not dead!

A baby-step evolution is to start by transporting the SDI audio and time signals over IP. The “SDI over IP” (SMPTE ST 2022-6) is the generation of equipment that is available today. It opens the doors to building a studio based on network switches rather than an SDI matrix, a fundamental step in the transition. As a result, broadcasters can start to build the know-how and competences needed to implement the transition – one of the biggest challenges organisations will face.  However, this technology generation usually results in very similar workflows to those of today and, therefore, it is more a step on a migration path than the final result of the transition. The buyers of this technology are naturally curious about upgradability to next generations, and indeed some vendors are already promising that it can be done.

The elementary flow generation will bring more flexibility in the workflows, some bandwidth optimization, and support new formats like UHD. This is an area of intense activity in the standardisation community. An example is the open specification developed by the VSF, Transport of Uncompressed Elementary Stream Media over IP (TR-03). This is now in the hands of the SMPTE for standardisation. This ‘due process’ takes many months before ratification, and the technology maturity and widespread availability usually comes after a few iterations of interoperability workshops.

This generation is about automated network management and up-scaling the size and speed of the possible infrastructure set-up.  Automatic discovery, resource identity modelling and connection management were identified in the JT-NM Reference Architecture as the foundation of this generation.  The AMWA has developed the Network Media Open Specification  (NMOS) that implements the JT-NM discovery and registration frameworks. This is timely as the SMPTE is currently working on standardising VSF TR-03. This will become SMPTE ST 2110.

This later generation is about fully exploiting cloud technologies. Many issues still have to be sorted out for live applications, including security aspects, sufficient network speed, and the capacity for applications to function over networks without a guaranteed quality of service. And for the same requirements of vendor lock-in avoidance, we will need open interfaces for virtualized services and data pipes. We can expect it will take many more years of work to get there.

The IP infrastructure train has definitely left the station, and we have a roadmap for the future... Stop by and see our demo at IBC Stand 10.F20!