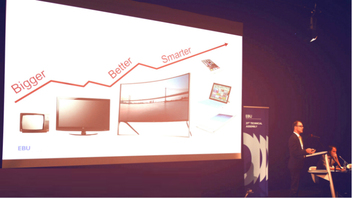 This was the key question asked by Simon Gauntlett (DTG) at the beginning of this year’s Technical Assembly in Krakow, Poland.  Referencing the 1985 classic, Back to the Future, he asked participants to think about whether or not we have reached the ‘future’ Marty McFly visited in the film.
This year marks the 21st Technical Assembly of the EBU (hosted by Telewizja Polska) and a few months before Marty’s future will have been realized, a poignant time to take a closer look at where we are today in broadcast media and how close we are to the film’s predictions.  We don’t yet have flying cars, but what about wearable technology, video calls or virtual reality? It seems we’re getting closer.
Transforming the future of broadcast media and how broadcasters are adapting to changes in media delivery were the fundamental themes of the Assembly. Mick De Valck (VRT) stressed the importance of being agile. “We need to go digital,” he said and called on broadcasters to continue to improve collaboration within their organizations and externally.
As broadcasters continue to move towards IP and networked media, security remains a hot topic. A new strategic programme has been introduced at the EBU on Media Cyber Security to further investigate this area. Andreas Schneider (SRG-SSR) gave further insights into the minds of hackers and how broadcasters can prepare themselves for the future.
The arrival – or rather the introduction – of 8k in practice and better versus more pixels were also discussed in detail. NHK Science & Technology Research Laboratories showcased their next generation TV system called Super Hi-Vision in an ongoing demonstration for participants over the two days.
Other topics of significance included advocacy for spectrum, 5G and net neutrality. In preparation for the WRC-15 Conference in November 2015, the EBU continues to participate in discussions and give input on behalf of its Members in order to facilitate the future viability of the terrestrial broadcasting platform. So far, most countries oppose an allocation of the 470-694 MHz band, the core DTT band to mobile services.
Members also presented their work during the annual “Proud to Present” sessions taking place during the Assembly. A range of topics were discussed including T2 and LTE, the IP studio, digital radio, HbbTV, live streaming, personalization, visual radio and DAB+.