The Chinese National Engineering Research Center on DTV and EBU 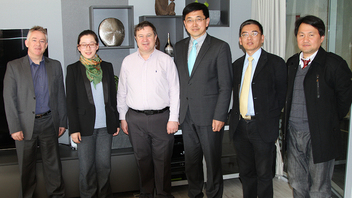 The delegation leader is Prof. Zhang Wenjun, a well known figure in the Chinese digital television industry. NERCDTV is also the entity that runs the FoBTV (Future of Broadcast Television) organisation that seeks to bring together the digital terrestrial television system proponents from around the world to design a future global standard.

Prof. Zhang is the chairman of the Technical Committee of FOBTV, an organisation currently led by Bob Plummer (NBC). NERCDTV colleagues enjoyed a tour of the EBU’s Digital Living Room and vibrant discussions on DVB-T2, HEVC, UHDTV and HbbTV.

The EBU Digital Living Room was developed to encourage Members and staff to learn more about the technology being used in the home and what we might see in the future. It is a place to share, learn and experience first-hand what it's like to use different services.