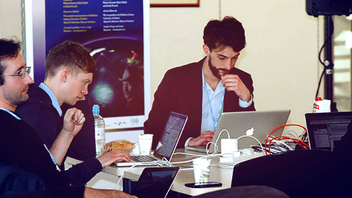 The phrase above was only one of the many mantras of this year’s EBU RadioHack. Other principles to follow included “RadioHack has no schedule,” “RadioHack is not a competition,” “You’re allowed to have fun,” and “Let’s get hacking!”
This year marked the fourth anniversary of the EBU RadioHack event, a set of freeform workshops where developers, engineers and geeks can experiment with the newest tools and techniques in digital and hybrid radio. The workshops are designed to have an informal, relaxed atmosphere, allowing participants to develop new ideas for tools and services and to start building them immediately.
The event began with a round of lightning pitches where RadioHackers had the chance to share their projects and what they would tackle during the event. Key topics for this year included: a new EPG/SPI for RadioDNS and DAB; RadioWeb, DABberry receiver; the universal smartphone radio project, API; hybrid and content radio; cross-platform authentication and tagging; visual radio production and more!
Other projects presented included work on service following, DAB transmission with ARM devices, automated chaptering of radio programming, odr-mmbtools and a software defined digital radio receiver. For the rest of the afternoon – and well into the evening – RadioHackers shared experiences, collaborated and well, just hacked.
For the first time, EBU RadioHack partnered with ITU who hosted this year’s event. Participants will have the opportunity to join their World Radio Day activities after the RadioHack. It's a great chance to make contacts and find new avenues to explore.