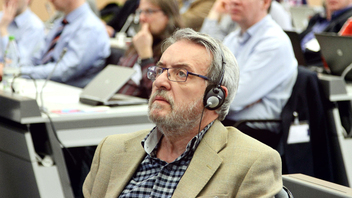 Yesterday’s Digital Radio Summit marked the 8th anniversary of such an event. With over a 110 participants from 25 difference countries as far as Australia and the United States, the event showed that the discussions around the future of digital radio are still top on the agenda of many organizations.
Director of Technology & Innovation, Simon Fell, opened the event with remarks on the many exciting developments showing the promise of digital radio in today’s crowded consumer electronics marketplace. He pointed to the example of visual radio coming into its own, with the EBU currently supplying visual radio to at least 20 radio stations and websites for the 2015 FIS Alpine World Ski Championships in Colorado. “We need to ensure that radio has a bright future by continuing to develop and push the boundaries of what is possible,” he said.
The first keynote speaker to take to the stage was Michael Hill, Founder and Managing Director of UK Radioplayer Ltd. Setting the scene for the rest of the day, he focused on how broadcast and internet radio will offer an attractive listener experience in the future. In particular, there are 3 things that he urged participants to do in their countries to help take hybrid radio to the next level: “Launch your own shared player platform; help solve the data-jigsaw and commit to RadioDNS, if you haven’t already; and, help fight back against the companies that want to steal our place on the dashboard.”
Digital radio is not so much about platforms anymore but rather about offering a simple and attractive listening experience to audiences. Often, the digital radio experience in cars is too complicated compared to newer applications and services. For digital radio to work and maintain its attractiveness, it must be seamless and automatically select the best way to receive services (i.e. service following). Frank Nowack, Ford’s Function Owner for Broadcast Media and Reception, noted in his keynote speech on the topic that the car industry (Ford) is dedicated to going forward with digital radio, but more coverage of European roads must be achieved to do so. He recommended that broadcasters pay attention to send correct information for service linking and information. There is no doubt that connected cars are coming but, streamed radio in cars won’t replace broadcast radio.
The rest of the morning’s session focused on updates from various organizations, including WorldDMB, DRM, RadioDNS, TISA and IDAG, and different country perspectives. In Sweden there is now a report recommending the deployment of digital radio for public and commercial radio with a FM switchover scenario. Government will give the decision in 2015 for the rollout. Polish radio continues its DAB+ deployment, targeting cities first. In France, there was recent news that the regulator (CSA) has produced a report on radio and has the objective to launch tender targeting cities first. In Germany, ARD has restructured its DAB strategy to go forward and it is planned to define an FM switchover strategy proposal in 2015.
Other key topics of the day included digital migration, smart and hybrid radio, and radio in smartphones. Switzerland has completed the definition of its FM switchover strategy. The objective is to have FM switched off by 2024 latest. Participants also heard more about the EBU Smart Radio Initiative and the latest EBU Digital Radio Toolkit that focuses on best practice and actions for the successful deployment of digital radio.
Paul Brenner, SVP/CTO of Emmis Communications, showcased the Nextradio Hybrid Radio App, a working example of hybrid radio smartphones from the United States.  His company found that when you give audiences something to look at (it has to be interactive), their listening time nearly doubled – an interesting piece of advice for broadcasters.
The development of interactivity and personalisation in radio also seems inevitable. To achieve this, BBC has worked within the EBU framework to help create a Cross Platform Authentication Standard which allows user devices to pair with apps and avoids one having complicated logins on every device and for every station. This is just the start.
The day ended with a panel discussion: Do we need radio in smartphones? The conclusion was that yes, there is a need but it must be interactive, attractive and offer possibilities to mix linear and on-demand content. All of the current effort and initiatives lean toward the integration of hybrid radio into smartphone. Mobile operators and manufacturers will have to find interest in this for the process to succeed.

EBU Radio Week is not over yet. This afternoon will kick off the next EBU RadioHack, hosted at ITU this year. For more information, click here.
The next Digital Radio Summit is scheduled for 10 February 2016.