About Open Source for the Media (and curing VVS) 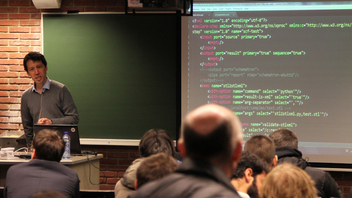 Put 5000 free open source software lovers in a university, add IPV6 WiFi and open the doors, that is in brief the recipe behind the yearly Free and Open Source Software Developers' European Meeting (FOSDEM), which took place last weekend in Brussels. The voluntary event is well-known in developer circles. This year for the first time, a team of the EBU Technology & Innovation department joined FOSDEM to co-organise a room and a day full of media-related talks.

Presenters from well-known software tools and services shared how they use Open Source Software to make their projects work. Whoever (still) thinks that is irrelevant for professional applications is plainly wrong. The one day Open Media Devroom covered many major themes in broadcast, including MPEG-DASH, high quality video conversion, codecs, players, subtitling and radio transmission. The fact is that many developers attending FOSDEM know up to the bit level (literary) how the technology works and what makes a good implementation.

Some highlights from the Open Media day include:

For who could not attend, the best advice is to check out the presentations on the FOSDEM site and to watch out for the announcement of next year's edition.

If you want to be kept informed of upcoming activities in this domain, join the EBU Open Source Community!

You can also check out/add to the list of media-related Open Source software.

Or drop an e-mail to: Mathias Coinchon (EBU).