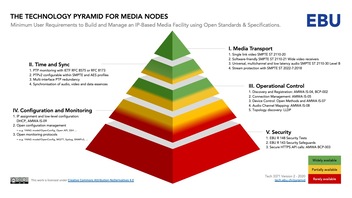 The Technology Pyramid for Media Nodes

The EBU has published an updated version of Tech 3371 and its 'Technology Pyramid for Media Nodes' graphic, a visual representation of user requirements, priorities and the market’s progress in creating and implementing relevant supporting standards and protocols in the SMPTE ST 2110 ecosystem of LiveIP technology. One of the most striking changes is that the Pyramid is greener now, reflecting a greater maturity of product implementations overall, relative to what the earlier version showed. Some layers of the pyramid were also renamed.

The Pyramid is effectively a gap analysis and forms part of the 'Minimum User Requirements to Build and Manage an IP-based Media Facility using Open Standards and Specifications' defined in EBU Tech 3371. It was designed specifically to highlight collective requirements and to encourage the adoption of open (non-proprietary) standards and specifications by vendors, in an effort to make deployments as easy and cost-effective as possible.

The updated Pyramid graphic is available as a PowerPoint slide for download.

Maintaining the strong focus on the end-user’s perspective, EBU Tech 3371 and the Pyramid were updated to reflect observations and address issues encountered by EBU Members during some of the largest LiveIP deployments of recent years. Version 2 adds or updates the following user requirements: