An end-to-end architecture for object-based audio 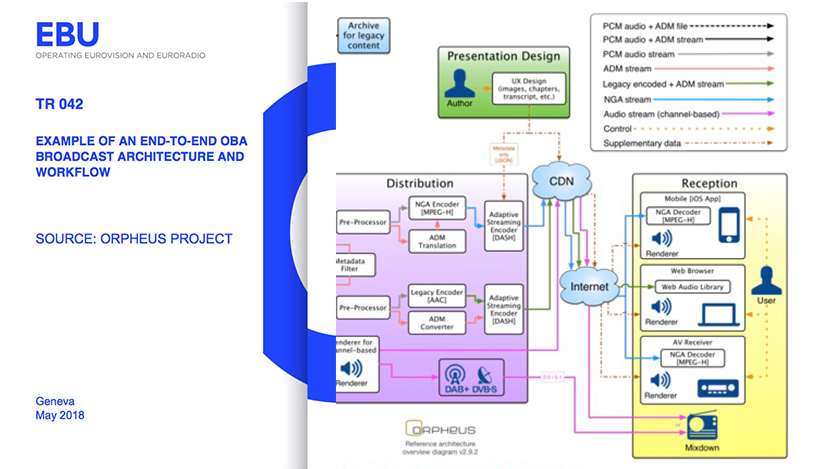 The EBU has published Tech Report 042, which describes a concrete and practical example of an object-based audio (OBA) architecture that covers the entire workflow along the broadcast chain from production to delivery.

The report is based on a detailed description of the ORPHEUS Project’s end-to-end reference architecture – a research project, funded by the European Commission, that has brought together three EBU Members and several research institutions and manufacturers. Over the course of two and a half years, the project team developed and evaluated an end-to-end object-based audio broadcast chain based on open standards and with a strong focus on real-world applicability.

Next-Generation Audio (NGA), of which object-based audio is a subtype, offers elegant solutions to a number of problems faced by media organizations. NGA programme material is multi-purpose and adaptable, allowing NGA-literate receivers to render a suitable output from it for any given playback system and environment, and freeing broadcasters from the need to produce multiple versions of a programme. NGA also enables access services, such as for the hearing-impaired, abridgeable or 'flex-time' audio content, and more. It can also help to significantly reduce data-rates.

Successful pilot productions using an object-based approach exist, but in general the broadcasting community is only beginning to embrace NGA technologies. There is a need to experiment and learn – a need that the ORPHEUS project has sought to address by creating a full set of tools and applications that span from content production to distribution. Tech Report 042 gives an overview of these tools and will be beneficial for all broadcasters who seek information on how to successfully implement a complete NGA workflow.

Interest in the technology is strong. A workshop at the IRT in Munich on 15 May 2018, organized by the ORPHEUS team for media organizations wanting to take a deeper look at the tools and to discuss the future of object-based audio, is fully booked. The team plans to make videos of some of the event's presentations available later on.